Maureen and Tim Gaul are primary care physicians dedicated to serving God and His kingdom in both America and abroad. Having met one another as medical students at the Philadelphia College of Osteopathic Medicine and completed their training at the Geisinger Medical Center, the couple has enjoyed almost 40 years together. They are the blessed parents of three children, Connor, Avery and their youngest, Evan who added the newest member to the family, DIL Kyleigh, two years ago. Tim and Maureen have resided in the Pittsburgh area for the past twenty years where Tim Tim recently served as faculty for a UPMC family medicine residency program and Maureen just retired after 20 years with a large pediatric practice outside the city.

Tim and Maureen have added additional skill sets to their backgrounds, Tim in Addiction Medicine and Maureen in Culinary Medicine. As CMO of a new hospital in one of the Pittsburgh suburbs, Tim served also served in medical administration for several years. Each has had the privilege participate in medical education during their careers, teaching students, residents and physician extenders in Pittsburgh and abroad.

Eight years ago, the couple responded to an invitation by Medical Education International, a branch of the Christian Medical and Dental Society, to visit and teach medicine in the country of Macedonia. The ten-day trip was, to say the least, a life-changing experience. Returning several times over the next few years, the Lord enabled them to extend their teaching sessions from 10-30 days at a time. Under the mentorship of the MEI/Macedonia Physician Project’s founder, Dr. Andy Sanders, Tim and Maureen took on increasing roles handling logistics for the numerous physicians coming into the country during the six months Dr. Sanders worked in country. God, through His grace and influence, removed several obstacles to accepting a more involved commitment and in 2017, the doctors Gaul took over management of the Project. This decision involved being in the Balkans six months per year while remaining employed as providers in the US for the remainder of the year.

Despite multiple turnovers in MK governmental leadership, loss of direct support from its Ministry of Health and COVID’s far-ranging impact on health and travel restrictions, God continued to bless the mission’s medical and spiritual impact. The Gaul’s love for the Macedonian people, a heartfelt desire to see the cause of Christ advanced further throughout the Balkans and bolstered by the encouragement of both their MK colleagues and visiting US doctors, the couple prayerfully made their decision to make the mission a full-time endeavor.

Preparing to return this September, Tim and Maureen look forward to continuing collaboration with MEI/CMDA hosting physicians from throughout the US and elsewhere helping them to bring medical expertise to their colleagues, mentor students and deepen relationships to further Kingdom purpose. In addition, by virtue of a full-time presence, they look forward to exploring several other projects addressing needs the Spirit has revealed during their time in-country.

Opportunities to serve in Kosovo, Albania, Romania, Bosnia, Bulgaria,Kazakhstan, and the United Arab Emirates are in various stages of development, consulting with medical schools and residency programs therein excited to see what Jesus has next in store for their next faith season.

Donations can be sent by mail to: Christian Health Service Corps PO Box 132 Fruitvale, TX 75127
Write “Missionary 0197” in the note of the check. 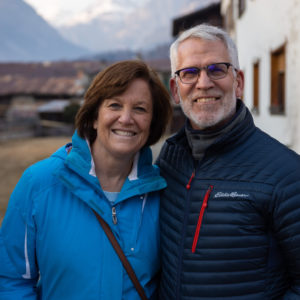