So it’s been a week since we fled Nyankunde. I have not written about the experience, mostly because I didn’t know what to say.  Most importantly, we are fine.  We are safe.  I am in Bunia.  Lindsey and Emmanuel are in Aru and plan to travel to Adi tomorrow. This is in the Northeastern corner of the country. It is a safe and calm place to be.

Things in Nyankunde had been heating up for a while. The military presence had become more visible.  There had been skirmishes with the militia.  Without getting into all the details, things got dramatically worse.  We endured several days of heavy fighting in and around the town.  The population panicked and fled to any location that seemed “safer”.  At one point we had around 50 people huddled in our living room.  When there was a lull, they simply disappeared into the countryside.

The interesting thing about such an experience is simply how little you know what is going on.  Rumors fly around, but there are few hard facts.  All you know for sure is sounds.  Little booms, big booms, closer and further away. You hear single shots, and bursts…and you wonder what they can be possibly shooting at!  At a certain point, you head for the shower and hunker down.  At several points I heard bullets whizzing over, but at no point did I see a person firing a gun!  I don’t know how many were killed or injured. I don’t know who “won”.  All I know for sure is that they used a lot of bullets.

Lindsey and Emmanuel did great under the circumstances. It was stressful. My impulse is always to try to be reassuring.  “Things are fine.  It’s still far enough away.”  Keep a calm voice and demeanor.  At a certain point, it just doesn’t seem to work. What worked for Emmanuel was simply to let him watch videos on the iPad.  At one point he figured this out.  He could hear gunfire in the distance and would say “I’m scared…I think I need to watch a movie.”  It is hard to describe the emotions you feel in such an event.  There is a very visceral reaction to the sound of close gunfire.  Frankly, it is terrifying. We also felt our hearts breaking for the suffering of the people.

We stuck it out for a while, hoping that things would settle down.  On Sunday, the noise of fighting and the large explosions had intensified.  It was pretty clear that it was time to leave.  When there was a lull, we put our bags in the car and drove out.  We stopped at MAF and we learned that they had made the same decision to evacuate their staff, planes, and vehicles.  We drove down the airstrip and took the shortcut that leads out to the main road.  This shortcut is a path that I usually run in the morning.  It is a little path which goes over a small bridge, through a little village, over another little river and up to the main road.  It effectively took us well away from the region of conflict.  Everything went well until we crossed the bridge. At this point, we were met by a group of militia.  It was a ragtag group of young men.  There were around 30 of them and they looked like they were headed into battle.  Lindsey and Emmanuel crouched down.  I started waving, smiling, and giving them the thumbs up.  I told them that I couldn’t stop, and they let me drive past.  We turned onto the main road and drove towards Bunia. 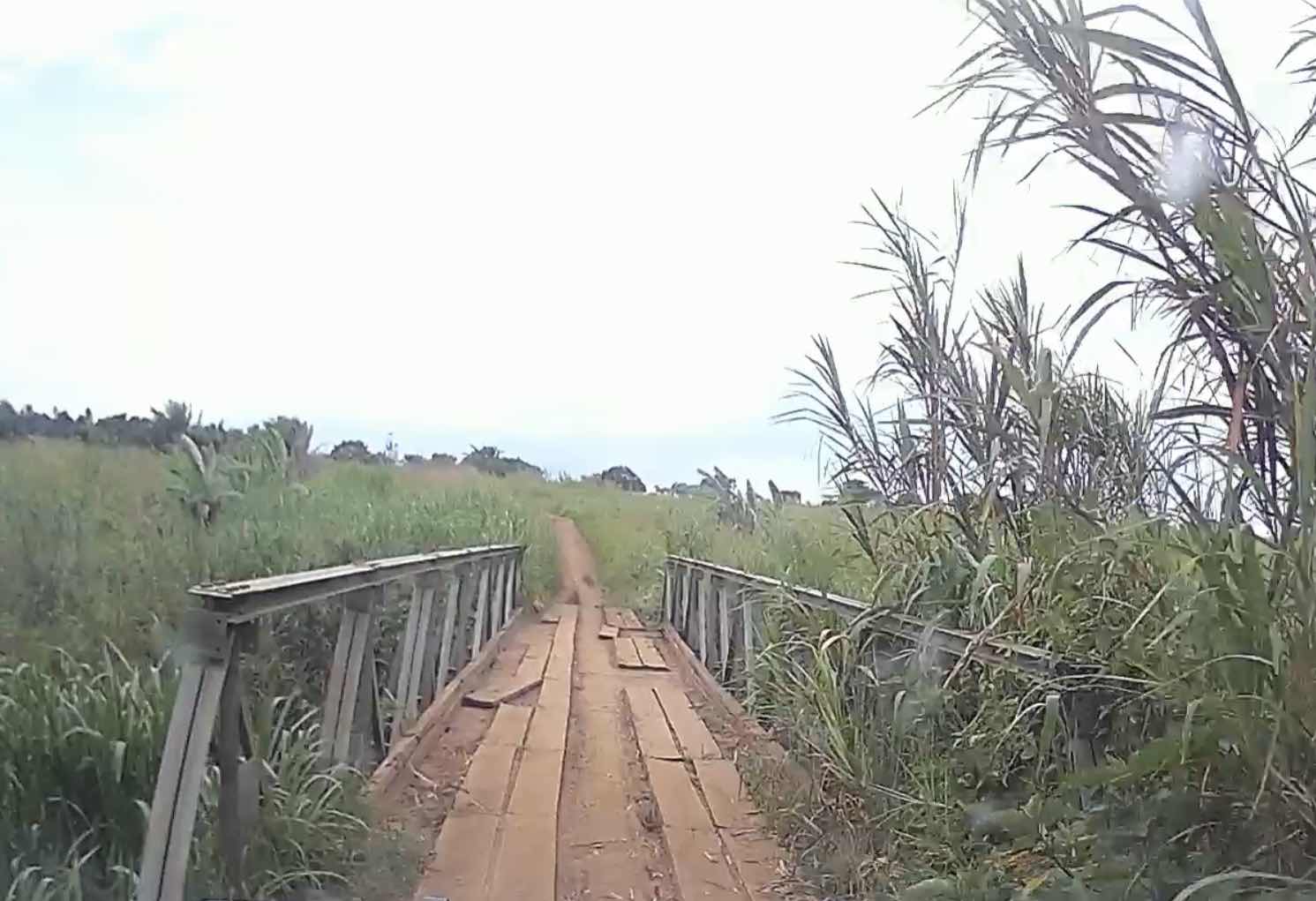 So much has happened in the past week, that it’s hard to reconstruct it.  We initially attempted to arrange some sort of UN cooperation to evacuate the remaining staff from the hospital.  This was not successful.  Perhaps there are situations in which the UN peacekeepers might protect the staff of a hospital, but this was not one of them.  In the meantime, the hospital continued to function.  They treated a number of wounded militia and provided medical care to civilians and the patients who remained.  I am intensely proud to say that the hospital never shut, never ceased to care for people, and is still functioning today.  They find themselves in a region that is now controlled by the militia. We do not know what the future holds, but the fighting has died down.  We are hopeful that some sort of negotiations might be possible.

I have made two trips back and forth to Nyankunde. On the first trip, we brought food and supplies.  I operated on two patients with grave injuries.  Since then one has died.  I went up to our house and retrieved our parrot. He was a bit unsettled but seemed ok.  I managed to get him in the cage and put it in the car.  The dog was nowhere to be found. I recovered some of the more valuable hospital equipment and left without incident. 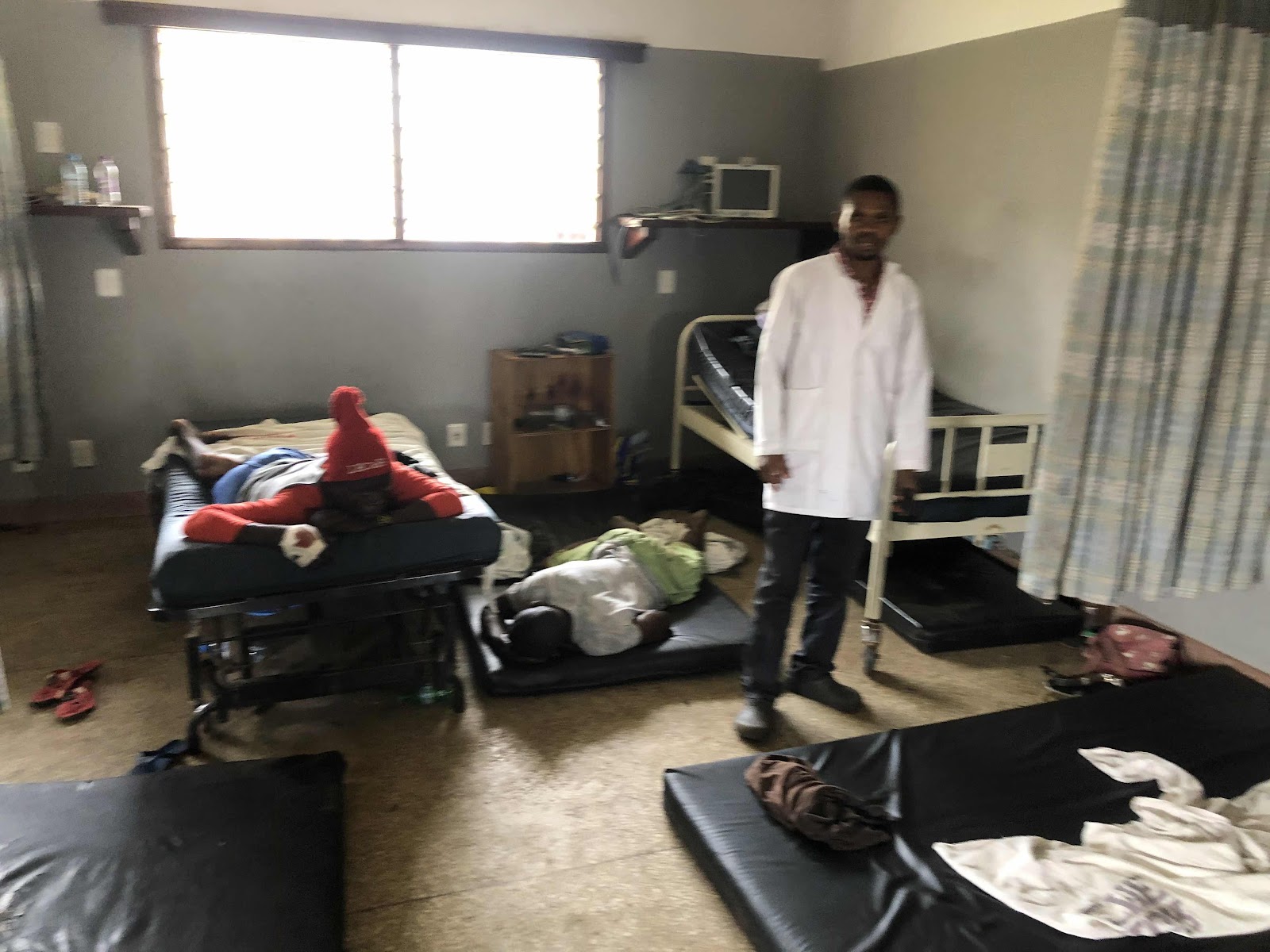 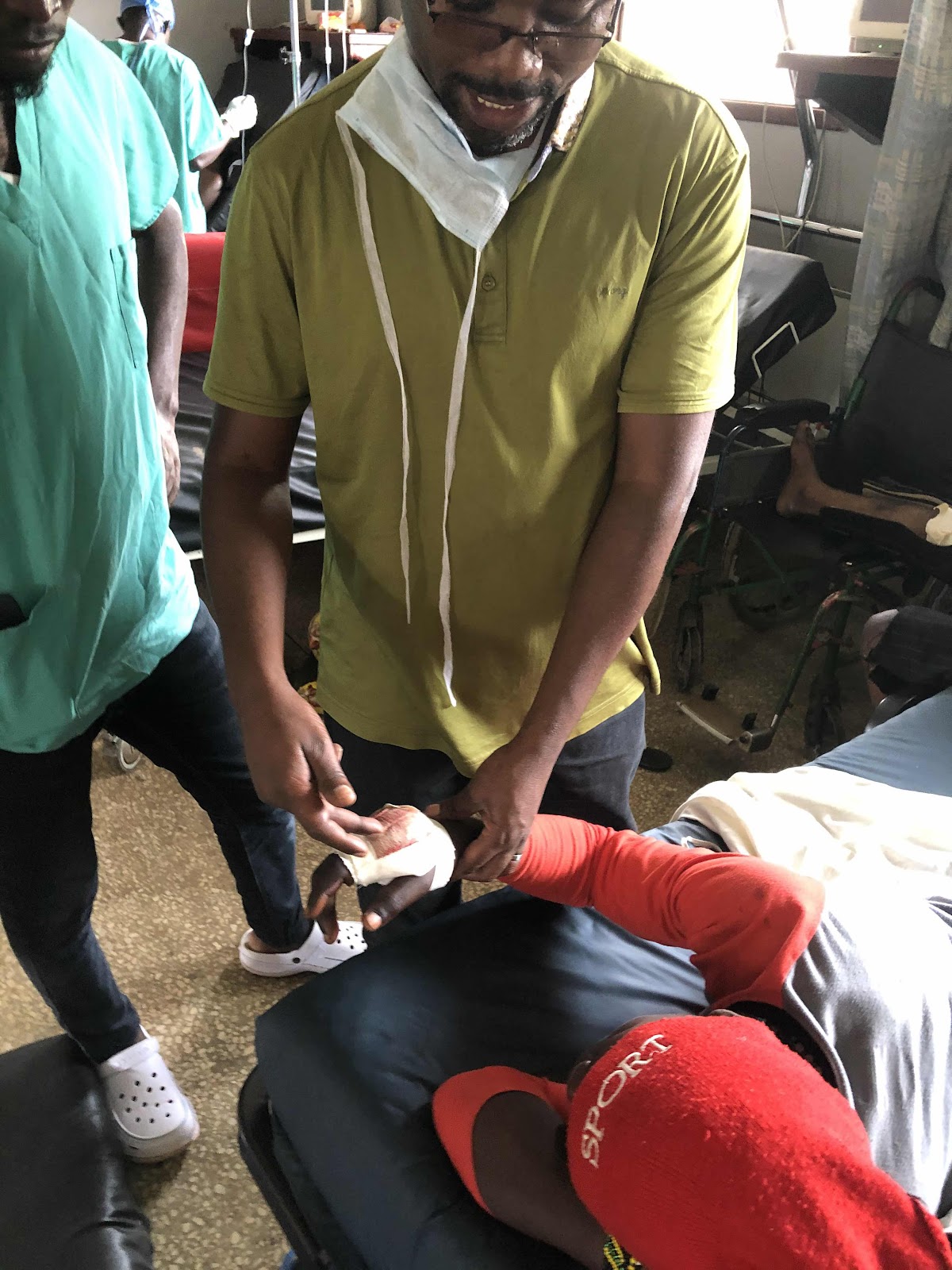 The next day I took Lindsey, Emanuel, and the Stafford family to the airport. They flew to Aru and will soon travel to Adi. After what they had been through, it seemed better to get them to a peaceful place.  Bunia itself is also a kind of chaotic place these days. In the afternoon, I went around pleading for assistance. This paid off big. I was able to get an emergency medical “kit” from the ICRC.  There was 19 boxes of the basic supplies we would need to keep the hospital running. I also spoke with Samaritan’s Purse, who generously contributed food and fuel.  I was able to leave the next day with a Land Cruiser full of essential supplies. 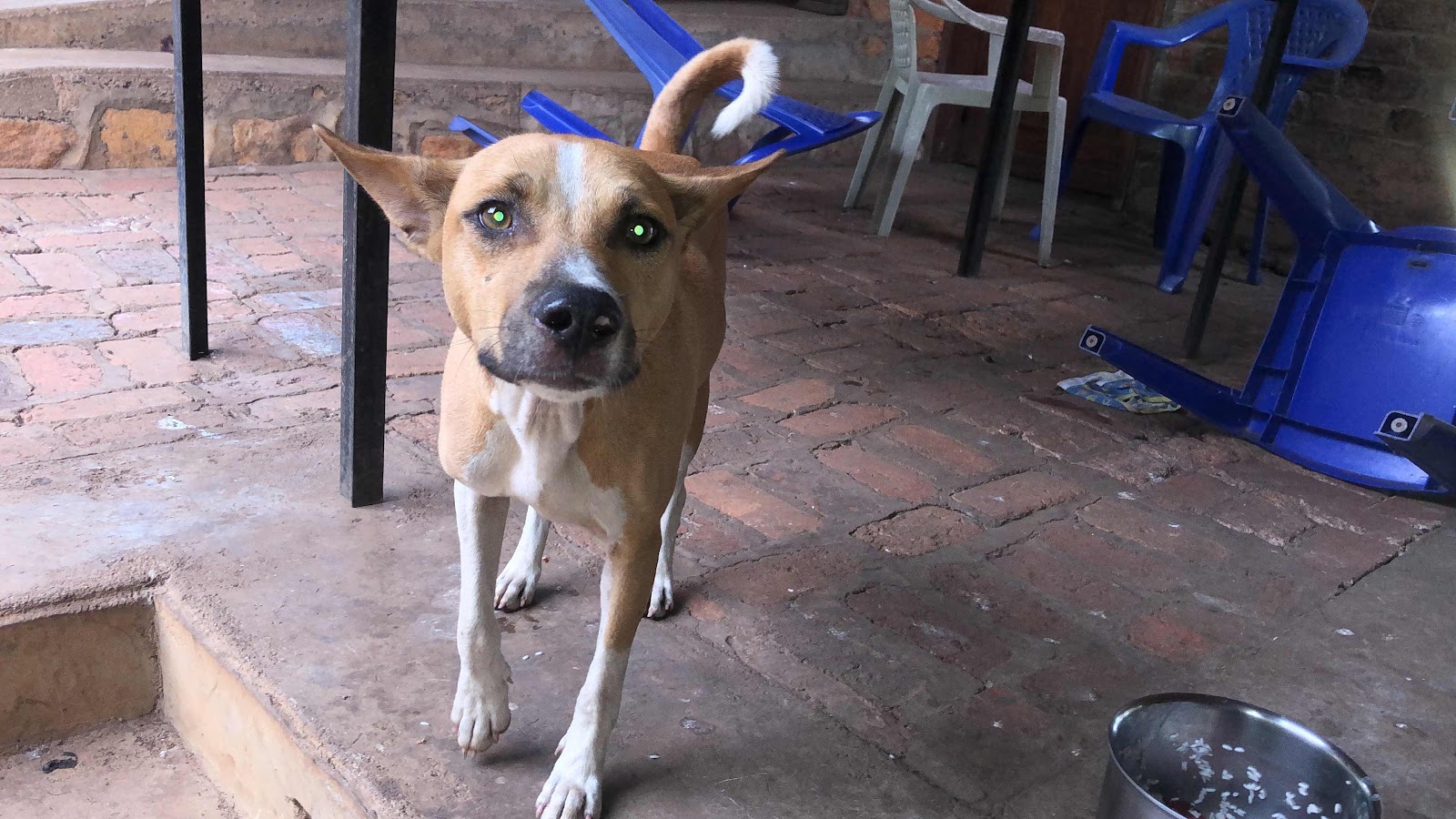 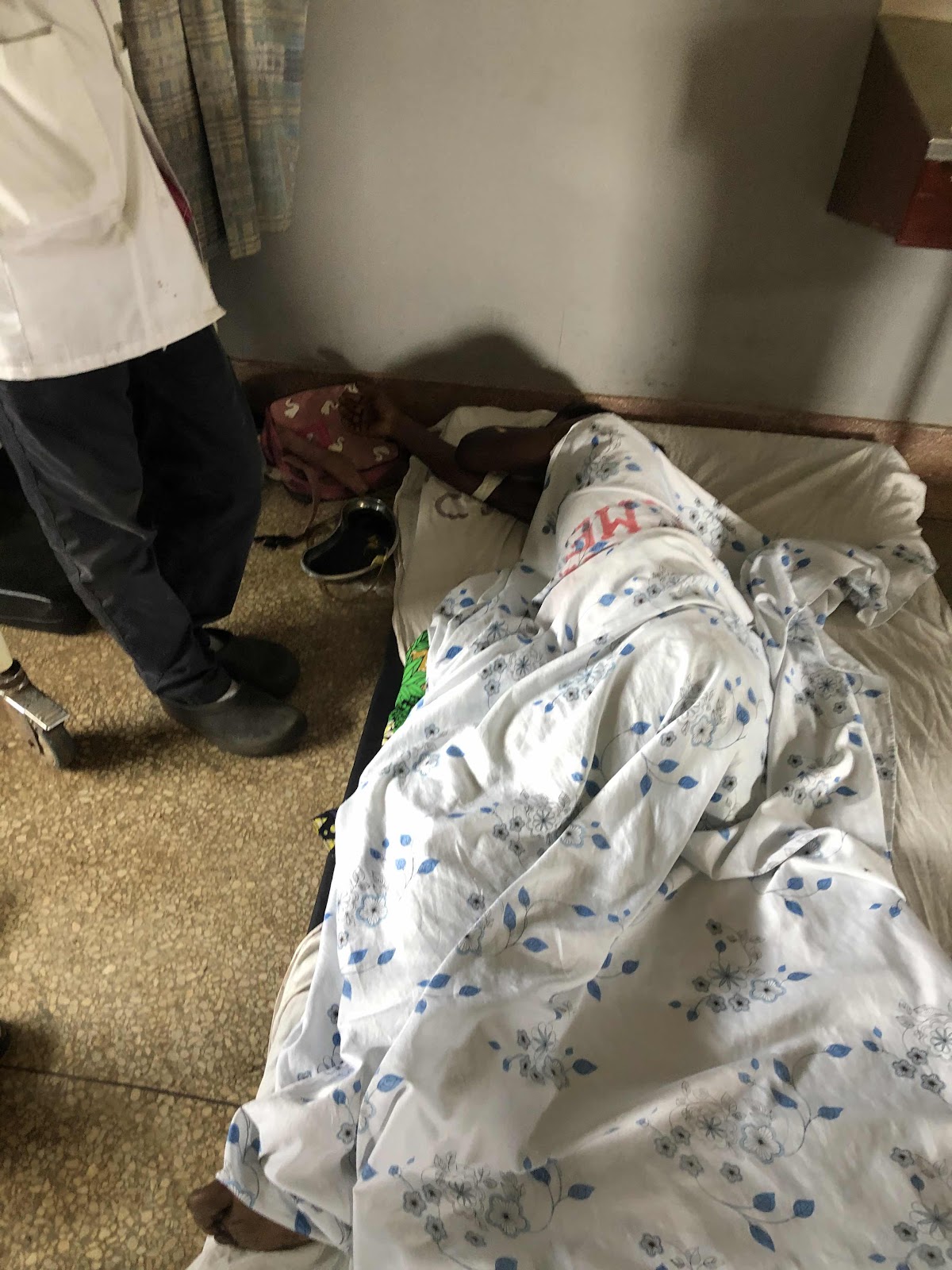 The next day I went back to Nyankunde. This time I did not hear any gunfire or explosions. It actually seemed quite peaceful. I rounded with the doctor who stayed behind.  I helped them to sterilize some instruments.  No one is interested in learning how the autoclave works until you don’t have anyone else to run it!  Luckily I was very familiar with it. I went around to various houses, trying to retrieve valuable items which had been left behind.  At our house, I was met by our dog, looking a bit worse for the wear, but alive and VERY happy to see me.  Turns out this dog really does not like the sound of gunfire. I got him into a cage which I secured to the roof rack. We loaded up the care with patients and caretakers who wished to leave. We stopped by MAF to get some valuables and drove back to Bunia. The hardest thing of the trip, by far, was that one of the patients had a broken leg.  He was in agony for the entire trip and each bump of the road resulted in moaning.  There are a lot of bumps in that road.  Despite trying to go as slowly and gently as I possibly could, it was an agonizing experience for everyone in the vehicle. 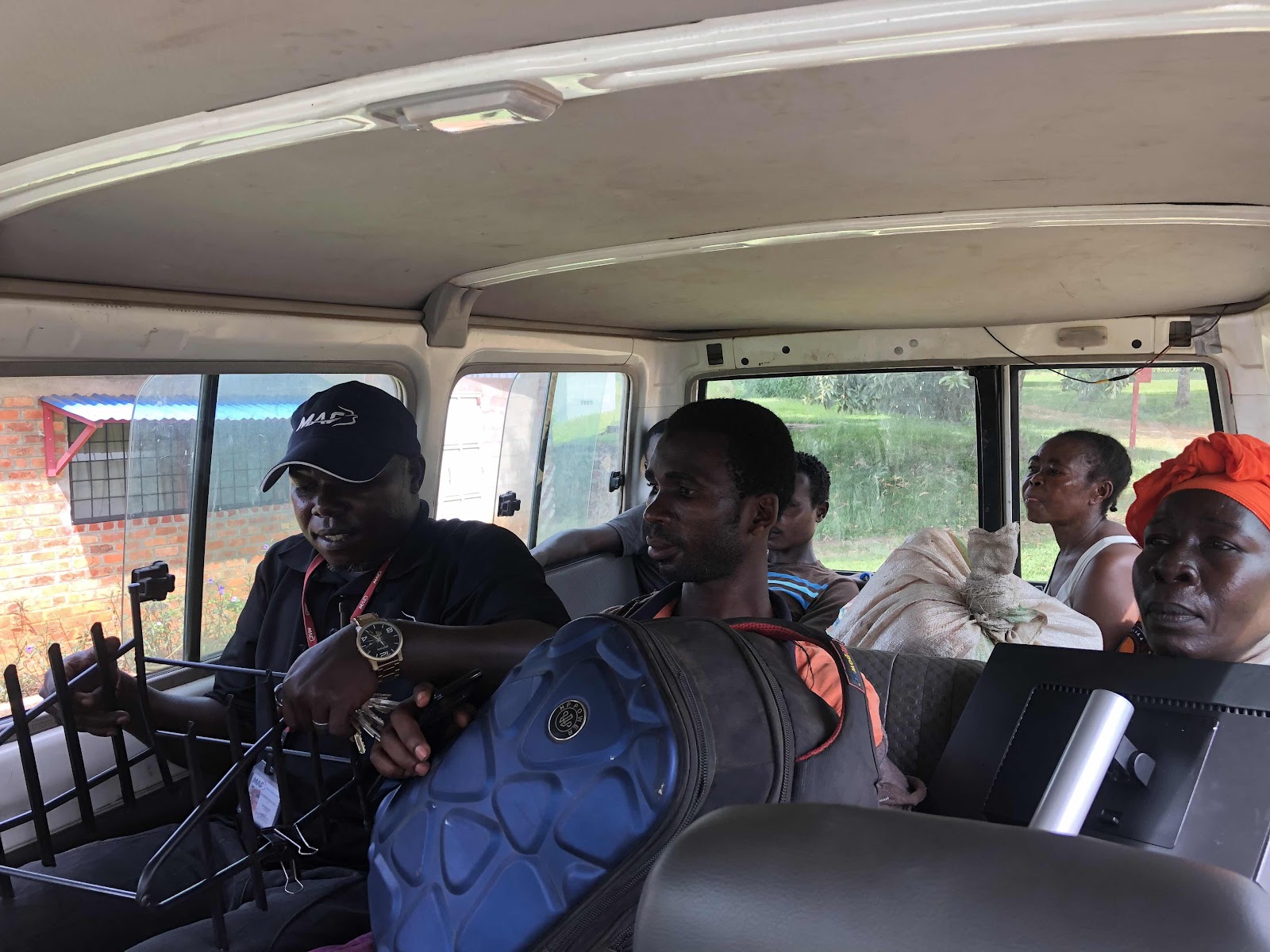 Anyway, that’s more or less the situation. I am hoping to go back tomorrow. The situation is calmer and I desperately want to help the hospital to continue to function.  By the grace of God and the courage of the staff who stayed, this hospital is still functioning.  A sense of normalcy is returning. It is not possible to predict what will happen in the coming days, but I pray and hope and believe that we will return and continue to serve. 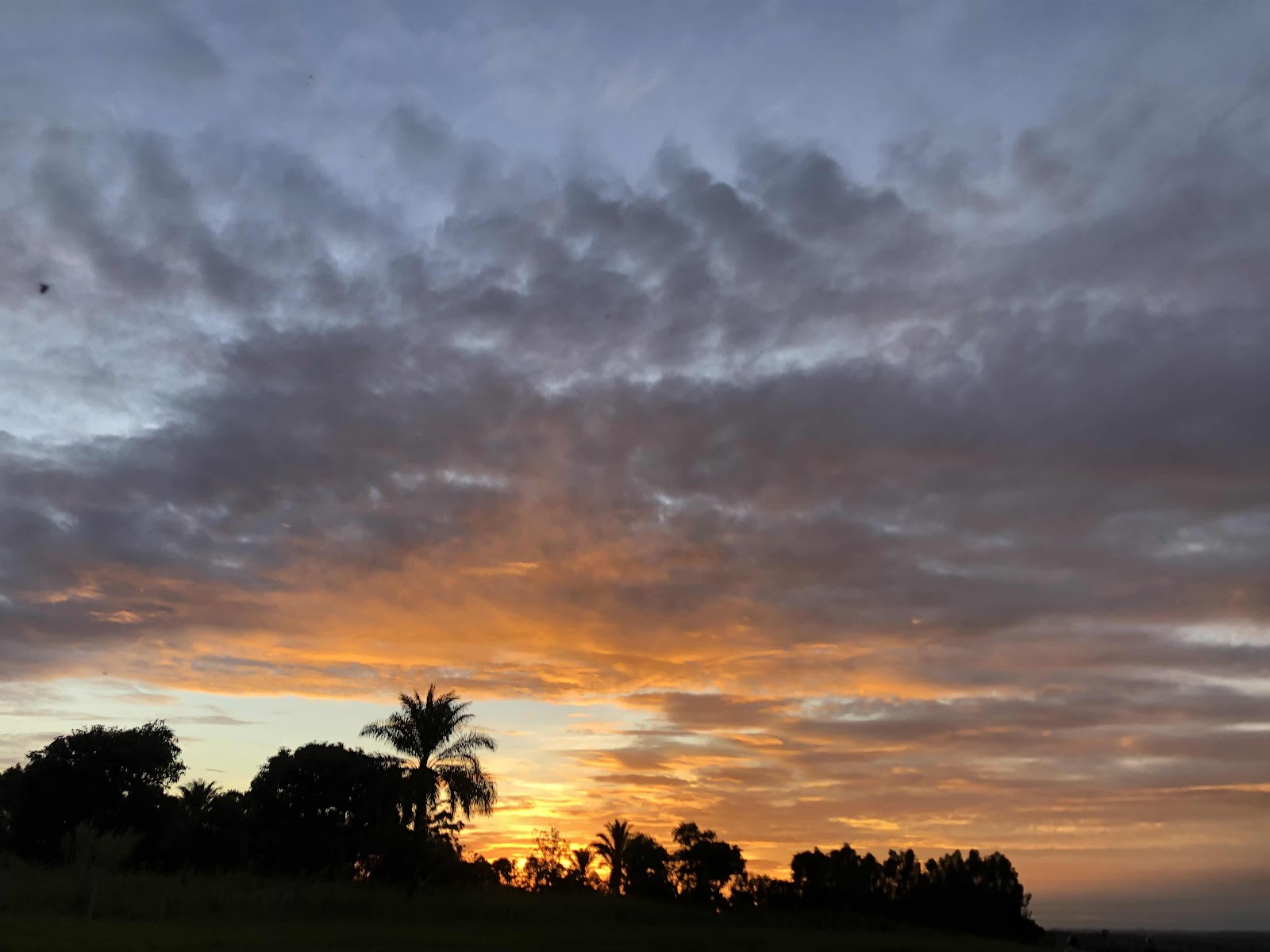