I have a new favorite patient, her name is ‘Breiny,’ which is pronounced like ‘Brainy,’ which makes me think of the smurfs.  I’m really not proud to admit that my Saturday mornings as a child involved big-ol’ doses of Papa Smurf and Smurfette.  I mean, we watched some cool cartoons too, like ‘Dungeons and Dragons,’ and ‘Spiderman and his Amazing Friends,’ but I’m not gonna lie, I think I watched smurfs deep into grade school, and I may have been flirting with Junior High.  Total loss of man points…

I always thought it was funny when the ogre named ‘Bigmouth‘ would stumble upon the smurf village and start yelling, ‘Bigmouth like smurfberries!!’  And I thought ‘Hefty smurf’ was pretty cool.  But I loathed Brainy smurf…  Which brings us back to Breiny, my new favorite patient.

She is from Rio Esteban, a village not far from us.  She came in with a confusing medical condition, I won’t go into the details.  But remember this:  It’s very cool to be an interesting person.  It’s not cool, however, to be an interesting medical case…  ‘Interesting’ is often doctor code for “I don’t have a clue what’s going on,” or “this is really bad, and there’s not really a cure.”  Luckily for Breiny, Dios Obra Aqui, which translates to “God is working here,” our hospital motto.  Thankfully, He knows whats going on and is pretty good at healing stuff, which He did in Breiny’s case.

So anyway, Breiny got better and she made me a really cute picture.  So, yeah, I’m sweet on Breiny. 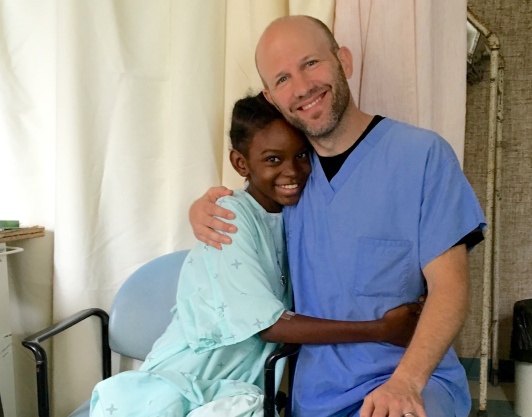 One day when Breiny was very bored, Heidi and Juliet went down and brought her some coloring pens and books.  They also brought a movie to watch together, which she really appreciated.  Breiny colored the picture below for me.  It says:  ‘from your favorite patient, for favorite doctor.  For Riant (Ryan), from Breiny.  Don’t forget me ???? 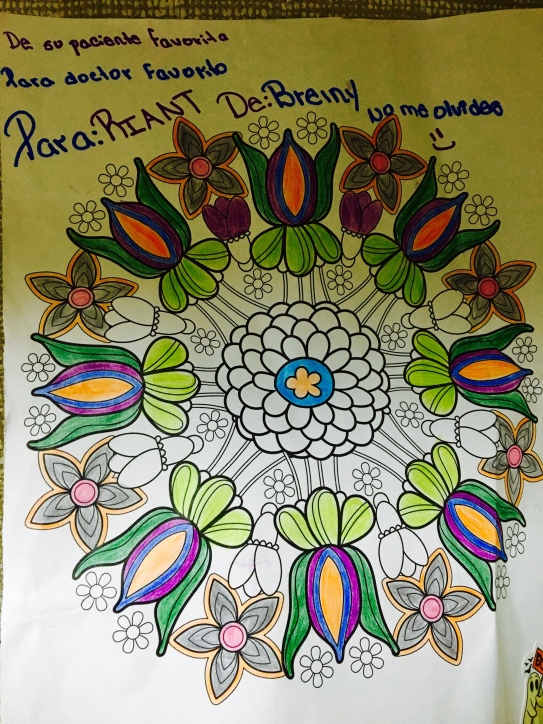 We had another ‘Dios obra aquí ‘moment the other night.  Dr. Roy, who is a new long term doc here at Loma de Luz, had his first night of call.  Naturally, he got slammed–I think there’s a new black cloud in town, and it’s not me.

In particular, a young lady came in who was very sick.  Mariela had a kidney infection which had turned septic (which means she had bacteria running through her blood stream, stressing all her organs and making her blood pressure drop).  Roy called me to join him,  and share in the angst that we all feel when someone at the hospital is really sick.  It’s always good to get more brains on the case.  I went down and joined him at 2 AM, where I too, promptly started stressing.  We were fretting because Roy had done everything just right, and she still wasn’t getting better.  Her blood pressure had been 60/29 and her pulse was in the 130’s.  For those of you not in medicine, those numbers are bad…

I mentioned in my last blog, when someone is 86 and has lived a nice long life, we don’t get quite as excited when they are facing the end.  But when a very healthy 19 year old mother is flirting with death, we get really excited, in a bad-excited kind of way.

At this point, after doing everything that we thought we could do, Dr. Roy and I stopped and just prayed briefly.  Little did we know that both of our wives couldn’t sleep after we left them, and were also praying for Mariela.

It wasn’t long after we prayed, that we went ahead and panicked some more.  After considering giving her some norepinephrine (one of those cool hormones your body makes in response to stress), we called Dr. Dave.  After all, if we weren’t sleeping, then why should he doze away, peacefully in his cozy bed?  Also, we would potentially need him to put in a central IV line.  It was shortly after placing that call, however, that she started to turn the corner.  She started peeing like crazy (doctors really like pee, let’s us know that the body is happy), her pulse slowed down and her blood pressure rose some.

Soon, she was able to complain to Dr. Dave that her nose was stuffy.  When you are about to die, you usually don’t complain about a stuffy nose, so we saw that as a good sign.   By the next day she was up and running around.  By evening, her fever was gone, she was eating well and asking to go home.  I think she went home the next day, ready to be mommy again to her 7 month old.

We were relieved, grateful, and humbled once again.  We can say that the fluids finally worked, or the antibiotics kicked in.  But maybe the Lord intervened when we asked Him to, this night.