You may recognize the story of “man verses bull.” Here is Elizabeth’s recap.

“Do you want to see a picture of the accident?” Tio (Uncle) asked in Spanish. I startled. In spite of how hard the chair I was sitting in was and the constant beeping of the monitors and ventilator, I had dozed off for a few seconds. It was now 2am and the fact that I had been awake for almost 24 hours was starting to catch up with me.
Tio handed me his cell phone. Even in the darkness of the picture, I could see the carnage. A cow split in half on the dirt road with three mangled bodies laying in a semi-circle around it. Jose was driving his motorcycle, with his two friends on the back, too fast, much too fast in the middle of the night. The cow he slammed into on the road was torn in half by the impact and their bodies thrown onto the road.
Jose and his friends were taken to a government run hospital in the city where the two friends were treated and released. Jose had a broken arm and shoulder, multiple broken ribs, a fractured skull, 5 jaw fractures, and was so severely brain injured that he was left on a stretcher in a coma for days. Left for dead. The family had heard about Hospital Loma de Luz and in a last ditch effort, decided to make the almost 5 hour journey here to see if anything could be done.
By the time Jose arrived, his brain was so swollen that he was unable to breathe on his own. He was put on a ventilator and then Dr Peter called his entire family of about 50 into his room. He explained that Jose was muy grave (very serious) and not expected to survive. He was going to remain on the ventilator for 24 hours hours so that they could say goodbye and then he was taken off. He was going to die. Dr Peter prayed for miracle for Jose and comfort for the family before leaving the room.
I sat with Jose for 13 hours that night monitoring his vital signs, giving him medications, suctioning his endotracheal tube, and watching the family grieve. My heart broke as Jose’s father sat by his bed for about a half hour pleading and crying with him. “Josecito, don’t leave me! I need you here!” 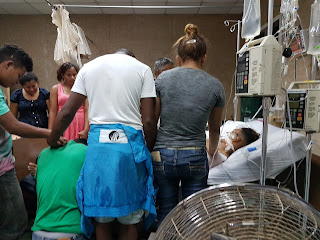 Jose’s family are strong Christians but Tio told me that Jose has previously told them that he did not believe in God. Tio believed that God would give him a second chance and led the family in prayer around Jose’s bed for hours. I have to admit that I had already given up hope. He was going to die.
Twenty four hours came and went with no change and then 48 hour later, Jose was extubated (taken off the ventilator). We waited for him to die. He held on for days with actual improvement in his vital signs. He failed his brain death tests but he still held on. We still believed that he was going to die while he family continued to pray over him.
And then one day about a week after being taken off the ventilator, Dr Peter went into Jose’s room and I heard him shriek like a happy little girl all the way at the nurse’s station. Jose had purposely tried to push Dr. Peter’s hand away! That was the first sign of life that he had showed since he had been admitted. Praise God!! Jose became stable enough to have surgery to repair his facial and jaw fractures and to have a feeding tube placed in his stomach. He even sat up in a recliner for the first time! His family was so attentive to him that it was decided to discharge him home in their care.
It was only about two weeks after his discharge that I was finishing up a night shift, that Jose was brought in by his family for a follow up appointment. The boy who was not supposed to survive was walking and talking! Praise God for His miracle! 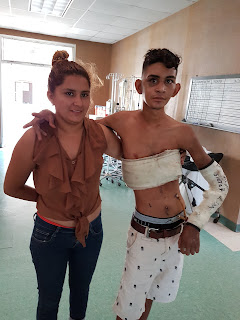