**Disclaimer: So keeping up on blogging is not necessarily our forte 🙂 Both of us had a science major in college, and neither one of us particularly thrived at writing. However, we would like to communicate with our friends, family, and supporters about what we are doing in Ghana and elsewhere. We apologize for the long hiatus since our last blog post, and we hope to do better in the future.**

We would like to first start by saying thank you to all our friends and family that housed us and fed us during our US travels the past 3 months! It was such a huge blessing! Thank you also to those who took time out of their busy schedules to come meet up with us and catch up a little. Apologies to those friends and family who we were not able to see this time, but know that we think about you and pray for you regularly. Lastly, thank you to the auto ministry in Memphis for supplying us with a vehicle during our entire US visit. We traveled by road between Texas, Tennessee, Georgia, and North Carolina, and this was made financially feasible by the auto ministry. 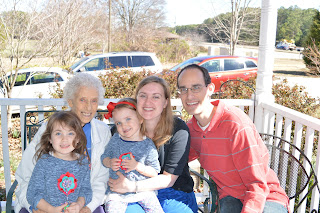 We arrived safely back in Ghana last week, and we returned to our home in Nalerigu (Northern Region of Ghana) last Saturday. Our plan is to stay for at least another several years, serving the Lord at Baptist Medical Centre. We were fortunate enough to get to move back into the same house we have been residing in during the past 2.5 years. In fact, we were able to leave most of our stuff in Ghana when we came to visit the US. We are now just getting settled back in before going back to work. 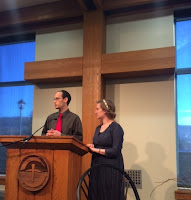 God has been good to us, even in the “little” things. I enjoy teaching, and during our time in the US, God gave me several opportunities to give lectures at residency programs about practicing medicine in Ghana. Both of us also were blessed with the opportunity to speak in front of a few different groups (some at churches and some not), as well as run a booth at a large missions conference, telling people about our ministry in Ghana. We were humbled by the number of people who came up to us to tell us that they had already been faithfully praying for us, and that they would continue to pray for us. We are also grateful for those who have chosen to help support us financially. It is through your prayers and support that we are able to serve here in Ghana.

One of the reasons we came back to the US after such a short period of time (6 months) since our last visit was to attend the orientation of the long-term sending agency to which we were transferring. We received approval to renew our work permit in Ghana back in November, and we desired to come back long-term. We had previously heard about Christian Health Service Corps, a long-term medical mission sending agency, during our orientation with Samaritan’s Purse Post-Residency Program back in 2013, so we contacted them right away after getting approval to return to Baptist Medical Centre. Thankfully, they still had room in their January orientation group (they only have orientation in January and July each year) for us to attend, so we moved around our flights a little in order to make it. 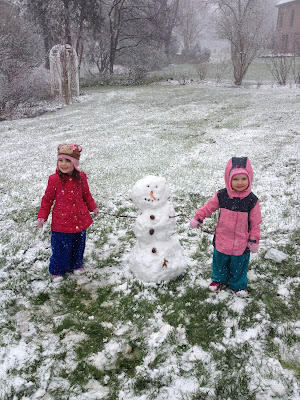 I also wanted to recount a few ways that God blessed us during our US visit and other travels. We had been hoping to show our girls some snow during our visit since neither one of them had been old enough to remember the last time we saw it. We thought for sure being in the US during winter, especially spending a few days in the Appalachians, that we would see some snow. However, it was an unusually mild winter in all the places we traveled. We did see some patches of snow in Nashville on our way through to Knoxville, but not enough to make a snowman. Then, on March 13th, a couple weeks before we returned to Ghana, we were in Knoxville and had heard that there would be some light snow nearby, but it wasn’t supposed to affect my parents’ house where we were. That didn’t stop us from praying for snow that morning though! It ended up snowing 1-2 inches later that day, which was enough to make a snowman, throw some snowballs, make snow angels, and do some modified sledding 🙂 (aka pull the girls around the yard on a boogie board) Funny thing was, there was no accumulation of snow about 5 minutes down the road. We considered that God’s answer to prayer.

Another way that God was looking out for us on our travels was when we were about to board our plane in Dubai. The people at the gate were weighing all of the carry-on bags of the people in front of us in line. This was the first time we had seen this done by this airline. We remembered seeing that the weight limit for each carry-on was 7kg (or 15lbs). We had forgotten to weigh ours, but we were pretty sure that some of our bags exceeded that limit. We started to get a little worried because this airline supposedly makes you pay for and check any bag that exceeds this limit. However, in God’s grace, when we reached the front of the line, they did not ask us to weigh any of our bags, but instead just pointed us through the gate.

Lastly, we would like to ask you for your prayers and accountability on the following:
1) Wisdom and patience as we begin to officially homeschool Rebekah.
2) Language learning. We are planning on taking one day a week to have someone formally teach us the local language, Mampruli.
3) Healthy pregnancy for Lori, uncomplicated delivery, and healthy baby. Lori is 19 weeks pregnant.
4) Readjustment back to life here in rural Africa.
5) Patience and wisdom as we try to get Abigail potty-trained.
6) Lori possibly working more hours at the hospital (if she is accepted by a certain program that helps to pay off school loans for medical missionaries). If this does happen, then favor in obtaining a medical license here, as well as wisdom on childcare, food preparation, and schedules.