Happy belated Easter! We hope that you and your families enjoyed celebrating the death and resurrection of Jesus Christ. What love God showed us so long ago (and continues to show us today)! As Easter fell on April Fool’s Day this year, it made me chuckle a little. Jesus played the greatest “trick” of all time – all the Jewish and Roman leaders at that time thought they had killed Jesus and that was the end of His revolution…wrong! Jesus conquered death and rose from the dead – can I get a Hallelujah!! – and His followers were later emboldened (aka His revolution had not ended, but only just begun) by His reappearance and with help from the Holy Spirit (the Helper that Jesus promised to send His disciples as He ascended into heaven).

Well, our lives have been full since the birth of Hannah. A couple of months ago, one of our hens decided to go broody. She was sitting on about 8-10 eggs. Then we realized that our other hen had been sneaking her eggs under our broody hen making a total of 17 eggs before we stopped her. We learned a lot about hens and eggs during the 21 days of incubation. Twice we made the hen move off her eggs so that we could candle them and see what was inside. It was good for us and the girls to see the chick developing. Shortly before hatching began, one egg disappeared (probably eaten by something). Then, little chicks began hatching. After 2 days, the mama hen was tired of sitting and took her 5 hatched chicks out for food and water. After a few hours of her not returning to the eggs, we decided to try a DIY incubator inside. We grabbed a plastic tub, a lamp, a thermometer, and a water bottle sprayer. We decided that if it didn’t work, that it wouldn’t be any different than leaving them outside. The girls were able to see some of the little chicks actually hatch! Nine of the remaining eggs hatched over the next several days (one died trying to hatch just before mama came off the eggs and another egg failed). We tried to add the chicks to the mama, and she accepted all but 3 of them. We kept those three in our “incubator” inside our guestroom bathtub for a while. One had a problem with its leg, so Tim played Physical Therapist for a few days to help it, using some band aids to help straighten the legs. Now, we have moved those three to a small pen (the old chicken coop that Tim built a year and a half ago) outside away from the other chickens, but where they can be seen.  We look forward to possibly having more eggs from these chicks in the future, but our friend tells us that most of our chicks are going to be male. More recently, our other hen went broody and is sitting on about 9 eggs, so we will see how that goes. 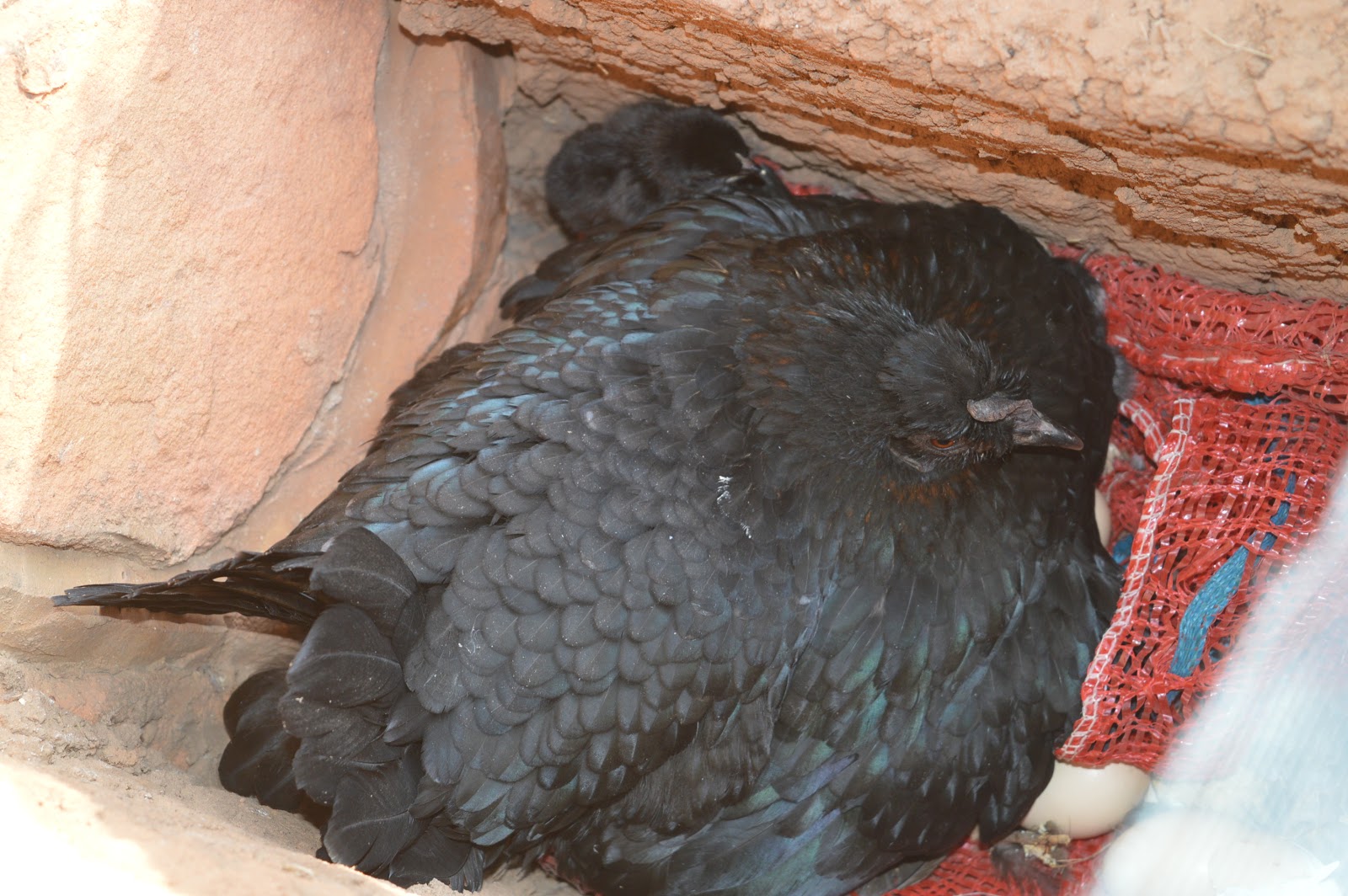 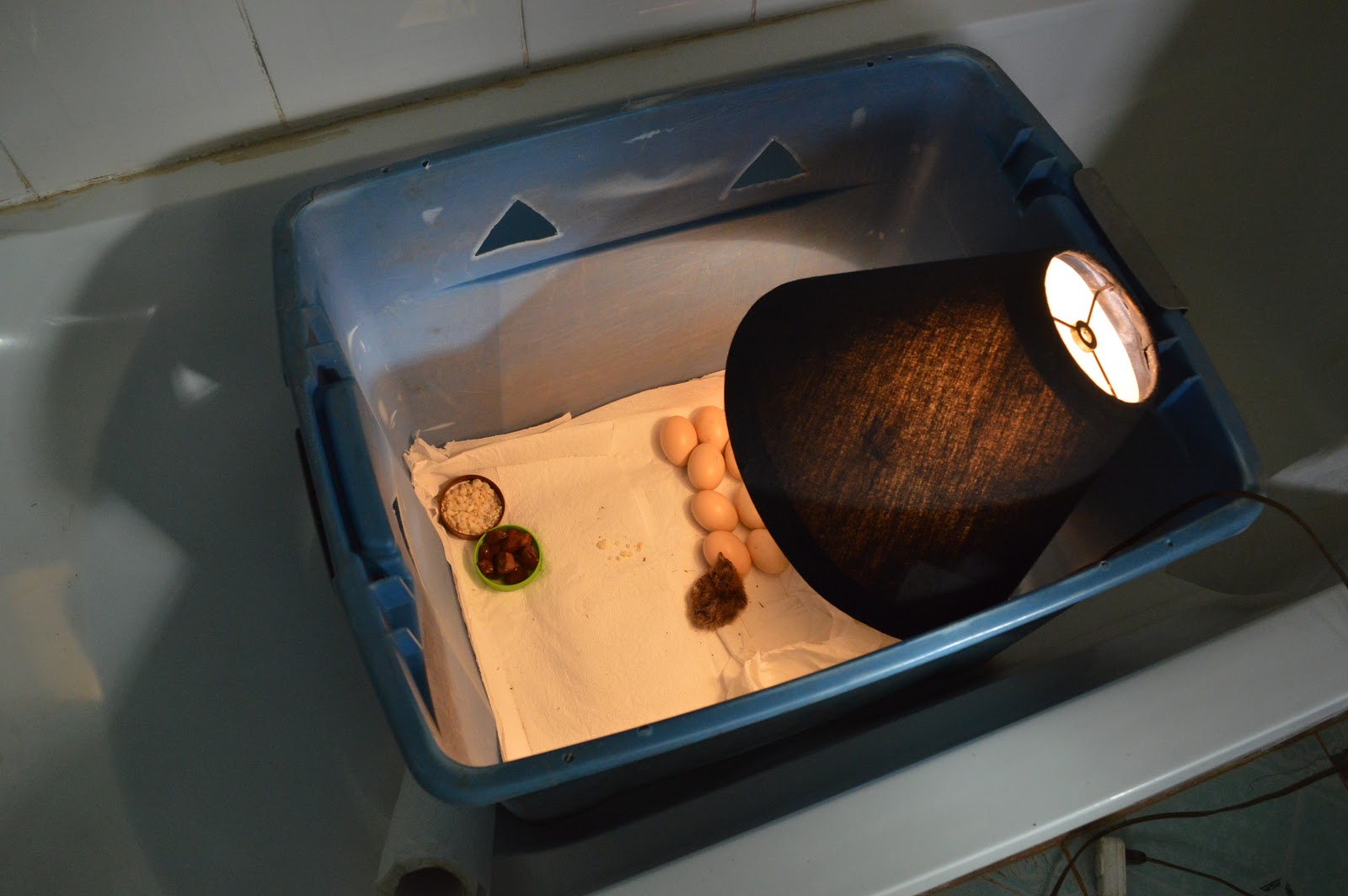 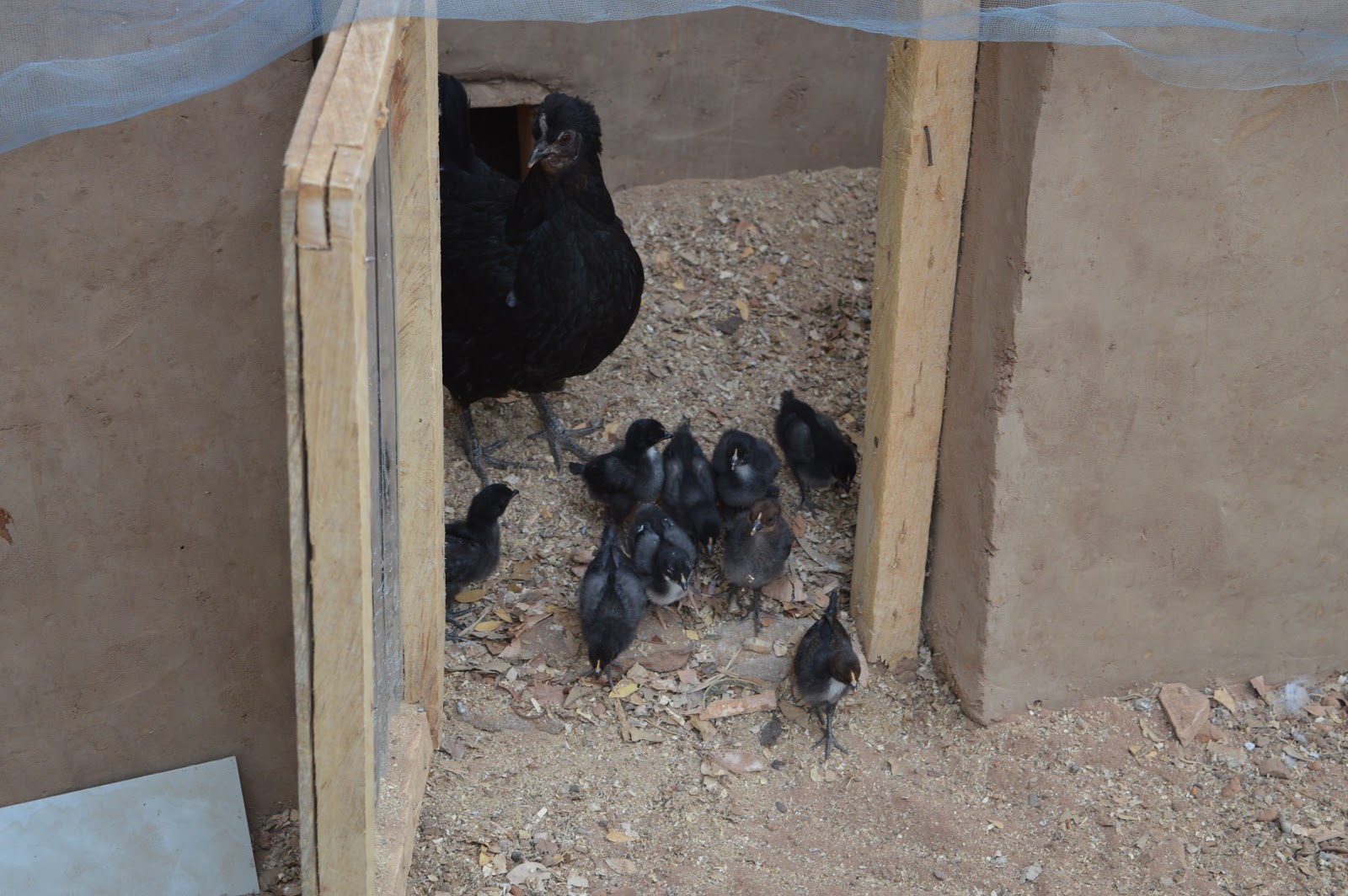 Our hen with her 9 accepted chicks

Abigail playing with the 3 other chicks 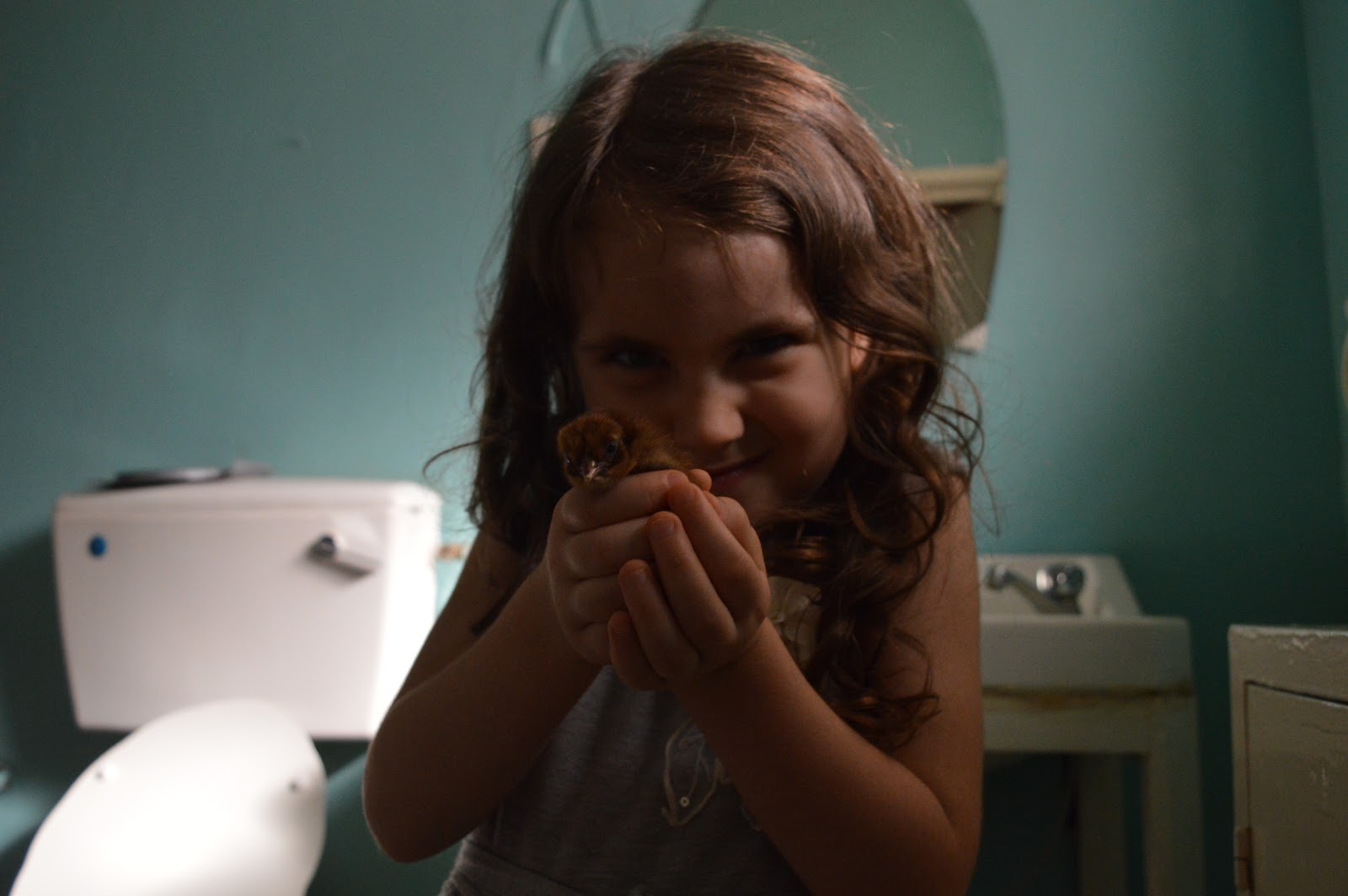 To coincide with learning about chickens, we have learned a little about their predators as well. The other morning, Lori went out to feed the chickens and let them out. We had a storm blow through that moved the plastic sheet over the small pen. She went to straighten the plastic out and found a baby snake about 1 foot away from her hand as it slid off the side of the cage. If Lori was not very awake before that, she was surely awake then. Of course, she let out a scream and ran to get Tim. He got a shovel and, from up on the steps, cut off its head. We were so grateful that neither of us or any of our chickens were hurt. God protected us and kept its mouth shut. 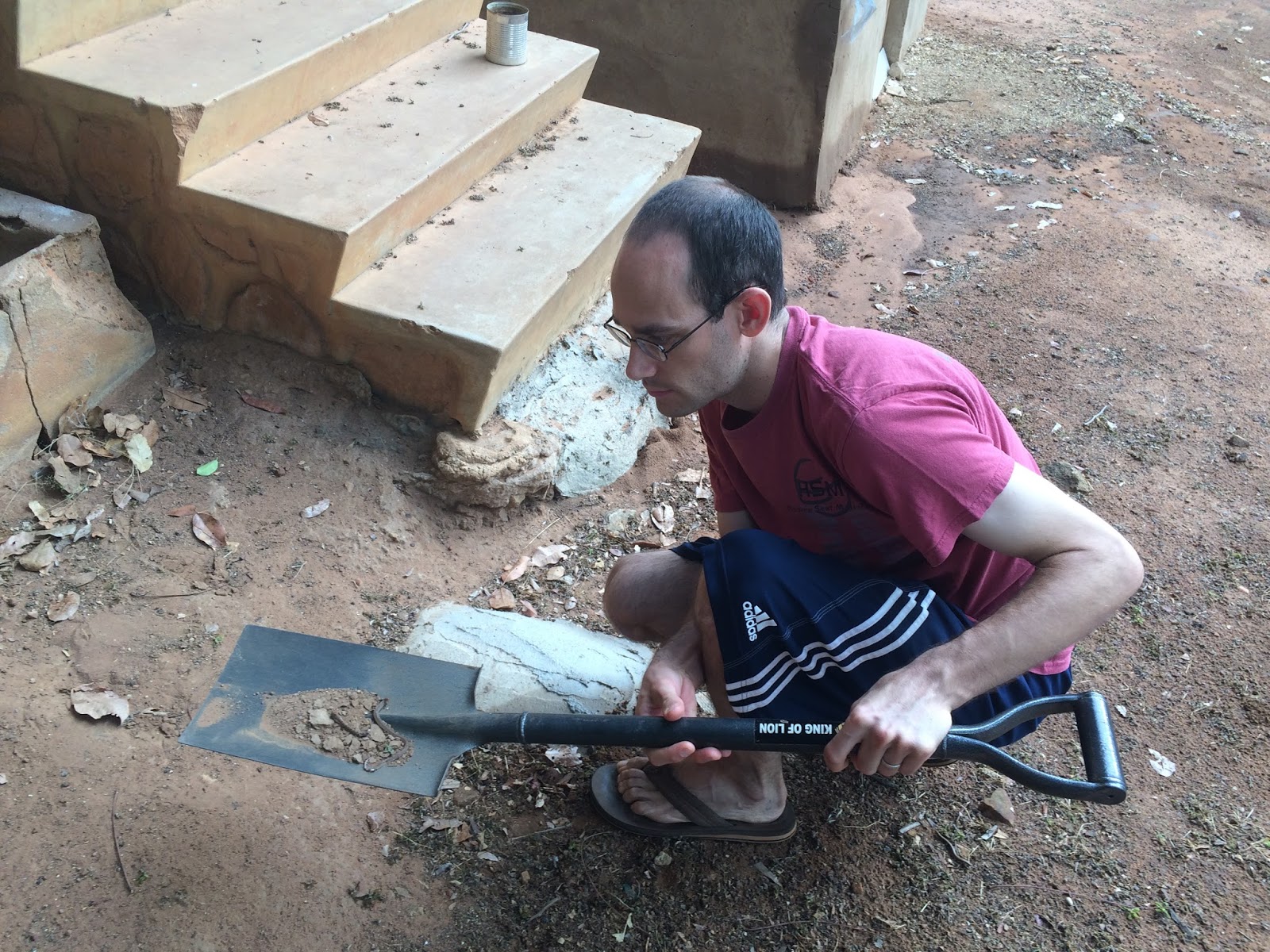 Another thing that we have been able to be involved with a little bit, is the building of a new church building. The church we attend is a small church on the pastor’s land. As our church is unable to hold everyone on Sunday mornings now, the church has purchased a new property and has begun building. They have finished building the walls with cement blocks. The next part is to back fill with dirt for the flooring. A couple Sundays ago, in the afternoon, many of the adults in the church gathered to begin this process. It was such a blessing for our family! We were able to work together with Ghanaian brothers and sisters in Christ despite not really being able to speak each other’s language well. The girls even got involved and loved it. 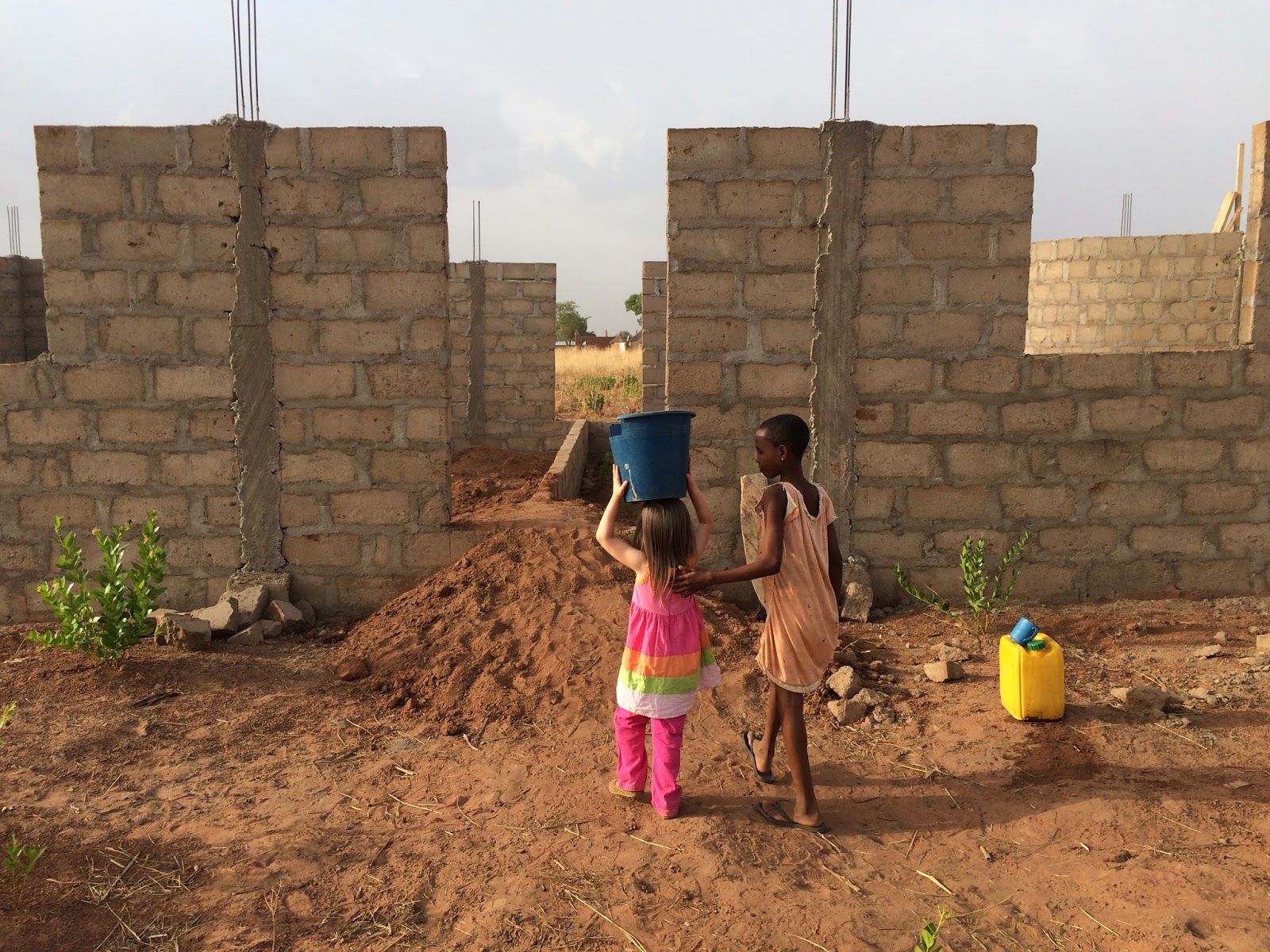 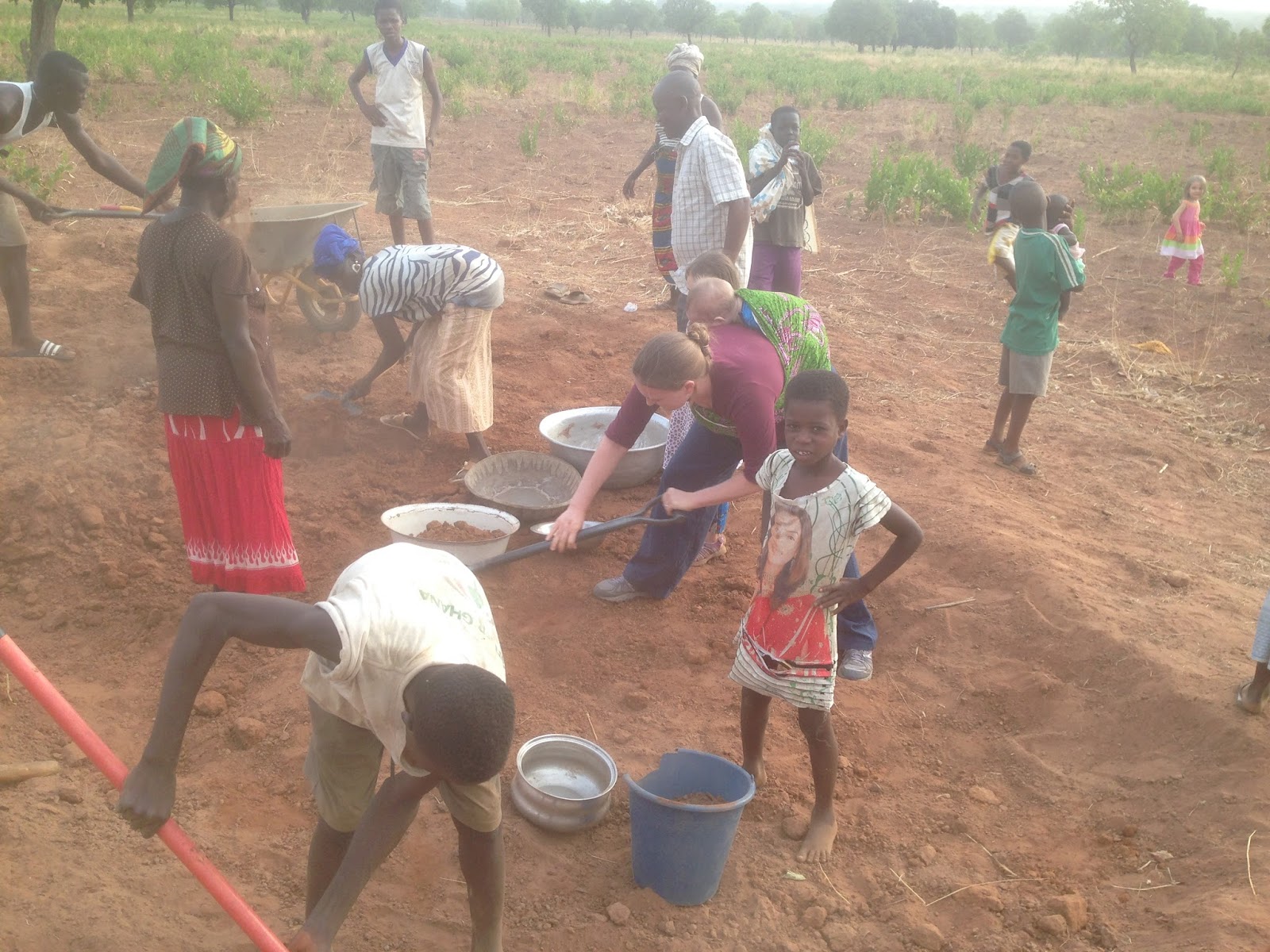 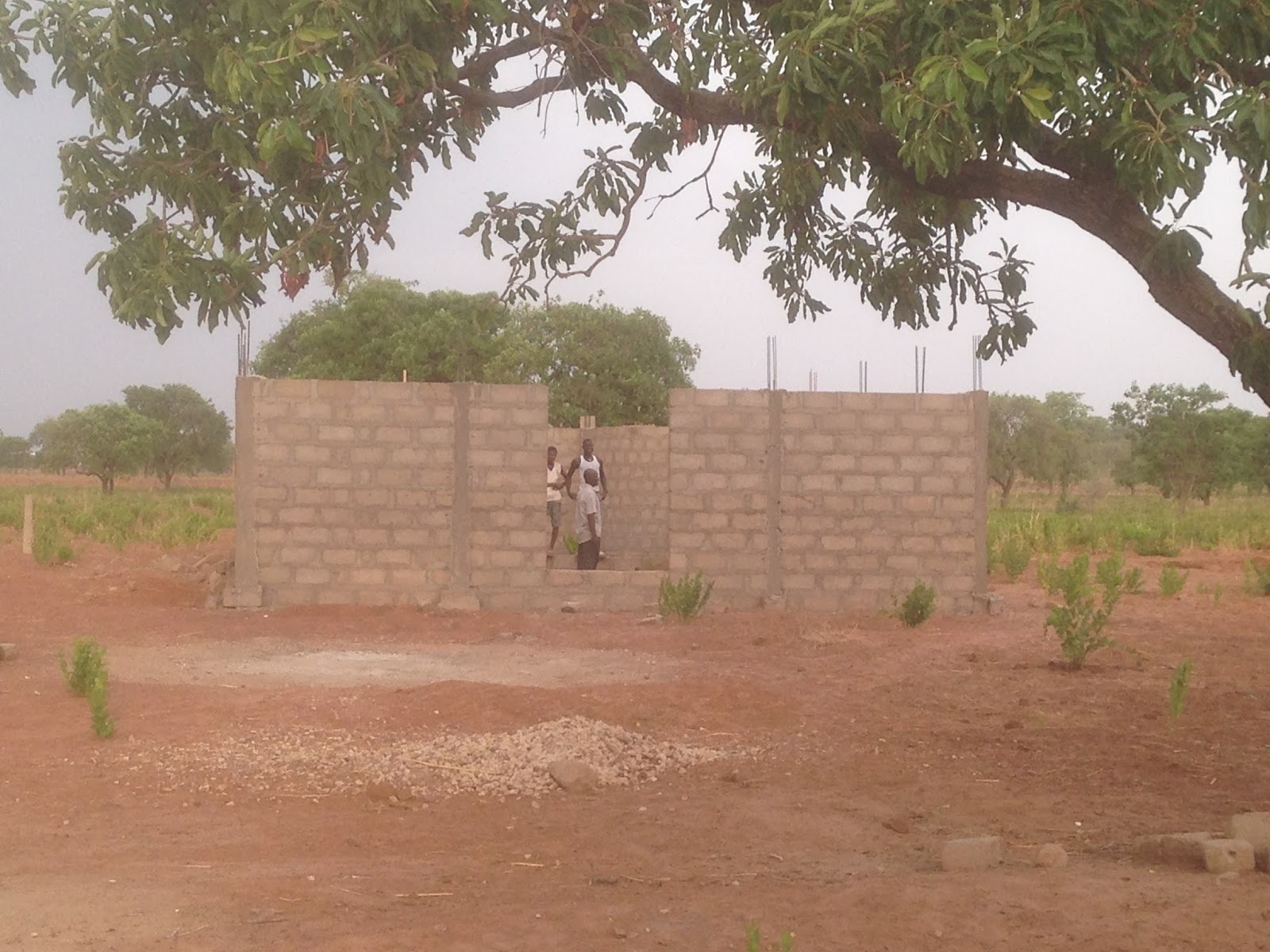 For those who support us with your prayers, we would ask you to be praying for a few specific things:

1. Continued safety for us and our chickens from snakes.

2. Continued spiritual growth for our family

3. Prayer for Baptist Medical Centre as it goes through a few staff changes in the next few months. Also, prayer that it would continue to be a place that represents and magnifies Christ well.

4. Prayer for the building of the new church as it is trying to reach a good stopping point before the rainy season begins