I have discovered my super power. I wasn’t born with it, but it gradually manifested itself in my young adulthood, and is now full-fledged and powerful. I really didn’t know what I had, however, until just recently…

It all started one afternoon, when I received a text, from this beautiful blonde gal ——(my wife Heidi). It read something like this:

Well, rest assured, we are still missionaries here in Honduras, but that little 6 legged blob in the sink, was indeed, a louse (plural: lice).

Needless to say, Heidi was a bit undone. For one thing, she has very thick, luxuriant blond hair, which made it quite difficult to clean (Thanks Dr. Anne for your vigilant hours of brushing her hair with, literally, a fine tooth comb…). Secondly, we all know that anyone who contracts Lice is likely a dirty person with poor hygiene, and generally speaking, just gross. I’m sure it didn’t have anything to do with the fact that she just spent the last month helping in the kindergarten class at the Bilingual school. We decided that from now on, Heidi has to take showers…

Anyway, here’s where my mind went with this situation: Do ya’ll remember Sea Monkeys? Well, when I was a kid I remember reading comic books, and invariably at the end of each comic there was an ad for Sea Monkeys. Oh, how I longed to order them. I dreamed of building them a beautiful habitat, and bringing their miniature eggs to life. Later, as they grew, I would have a tiny new set of friends. I would teach them tricks, and I was certain that eventually they would be able to communicate with me. Just look at the advertisement. See that family huddled around the bowl. And the tribe of sea-monkeys, all smiling and friendly. That was going to be me. They were going to love and worship me…

Well, eventually, I ordered my batch of Sea-monkies, and dumped the packet of eggs in the water, then waited. They hatched, and I fed them and they grew. Then, I peered into the bowl, their universe, with eager anticipation… Turned out they were just brine shrimp that had been dehydrated. Basically, sea bugs… And they didn’t appear to be aware of my benevolent presence. And they didn’t do any tricks, or talk to me. There was definitely no worshiping going on. But, oh, how they captured my imagination.

Anyway, I now have the idea to create a new spin on Lice. Let’s re-market them as ‘Hair Fairies.’ I’ll start by harvesting their nits (from Heidi’s hair, of course). Next, I’ll bundle them with some clever packaging. Picture the Twiddlebugs from sesame street. Finally, I’ll start a mobile phone advertisement solicitation campaign, and make sure that ads for ‘Hair Fairies’ pop up on the side panel of every website that the world visits.

Soon, young children across the country will dream of hatching their own ‘Hair Fairies’ in their scalp. They’ll create loving habitats in their own hair. No longer will it be a badge of shame to have the little critters sneaking out onto your collar. Mother’s will be bragging to their children’s friend’s parents about their kids latest edition of Hair Fairies, the Premium package Hair Fairies (aka permethrin resistant super lice), with extra dandruff augmentation. Yes, I’ll be rich and famous… which should be everyone’s goal in life, right (Sarcasm font)?

So anyway, back to my super power. Let’s just say that I could sleep next to my contaminated, lice-infested wife without any hint of fear. I am impervious to the virulence of the Louse. It’s sinister assault is rendered harmless by my follicle-challenged scalp, or as I like to say, “Lice-invincibility”.

Unfortunately, I just realized my kryptonite: back hair…

-I saw 2 women under age 28 with cancers yesterday. One of them I think we can cure, with surgery. They other looks more ominous, we will see. She is only 19, so she could really use a miracle.

-Prayer for stamina and unity amongst our community of servants

So, we recently discovered this interesting beetle for the first time.  I’m not sure what kind of beetle it is.  I tried to google it but was unsuccessful (pretty sure we discovered a new species).  We were all speculating about the purpose of the fuzzy cephalic protuberance off of its head.  I’m pretty sure it waits until it’s victim is asleep, then crawls up to the side of her head, clamps on to her skull with it’s sharp front legs, and then inserts it’s ‘wand’ into her ear and sucks out her brains.  Well kids, sleep tight, time for bed…

Honduras celebrated it’s Independence Day on September 15th.  Everyone congregated on the streets of the little town nearby, Balfate, to enjoy a parade.  Juliet (9) who attends the El Camino Bilingual school, marched with her class.  Following are several pics: 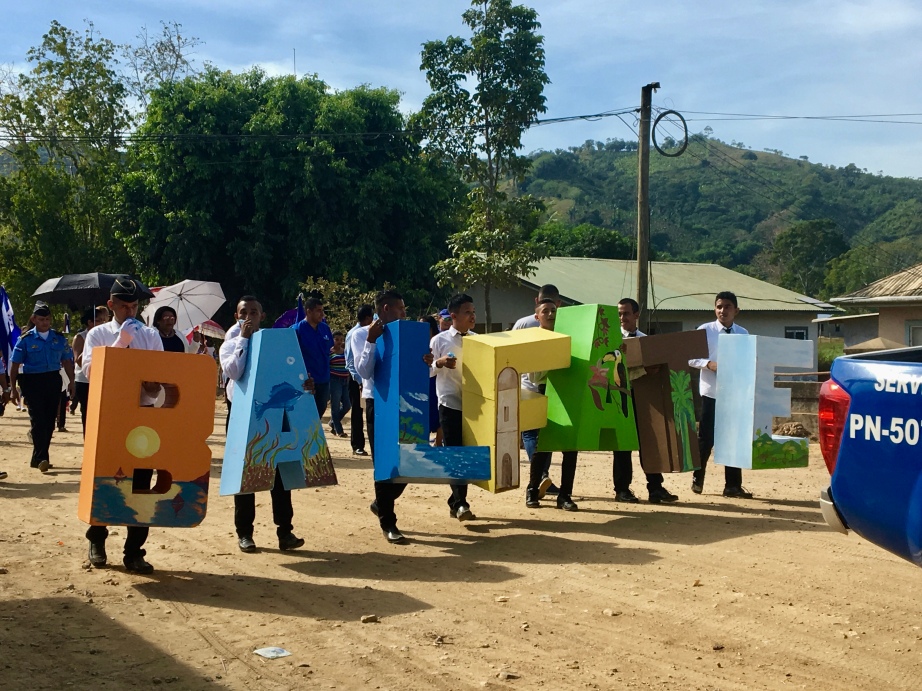 Beginning of the parade, “BALFATE” 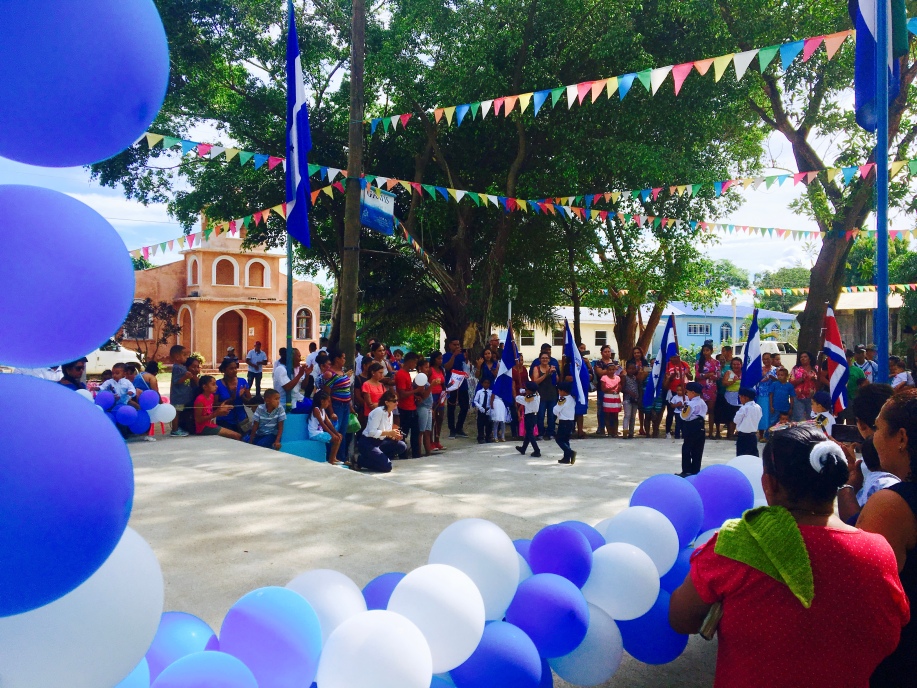 Town square, end of the parade 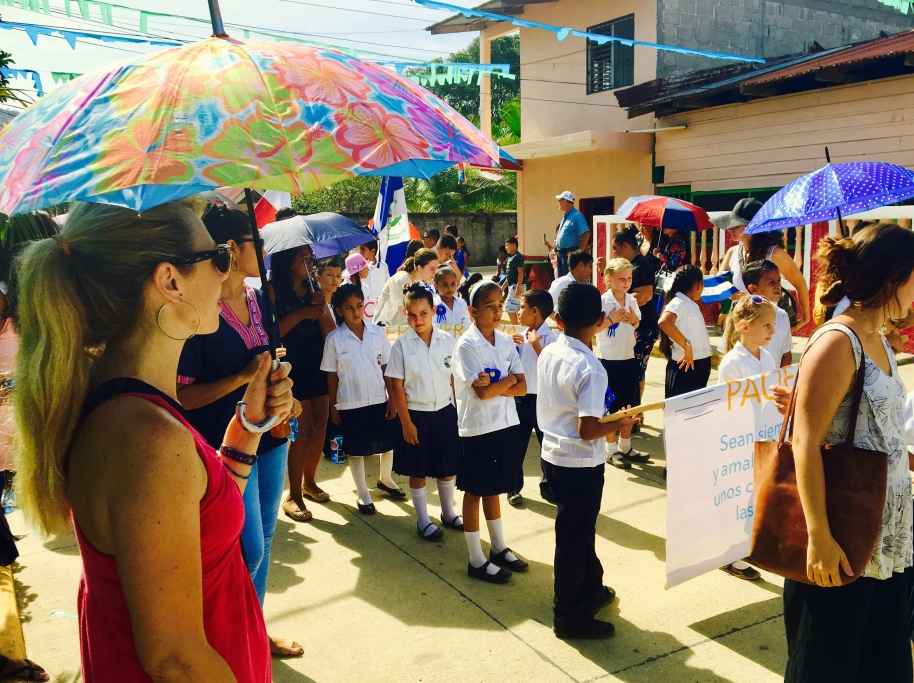 Heidi watching the parade, Juliet at the front (blonde gringo…)

marching under the hot sun 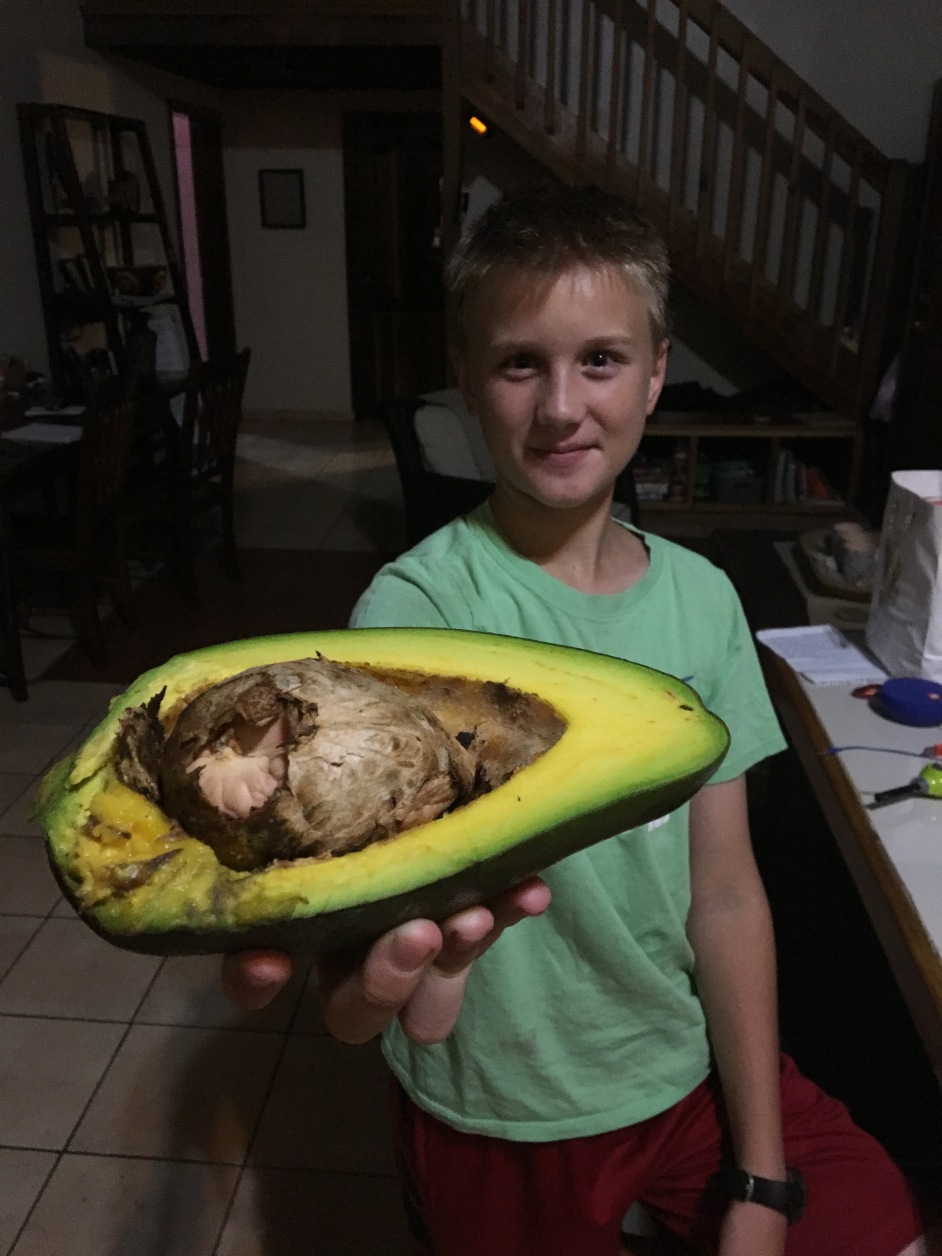 hiking in the jungle

We recently had a team come down from our home town of Yakima, Washington.  Dr. Shively and Dr. Cox visited us for a week, with their families, and did some fantastic work in the operating room.  Can’t wait to have them back again in February! 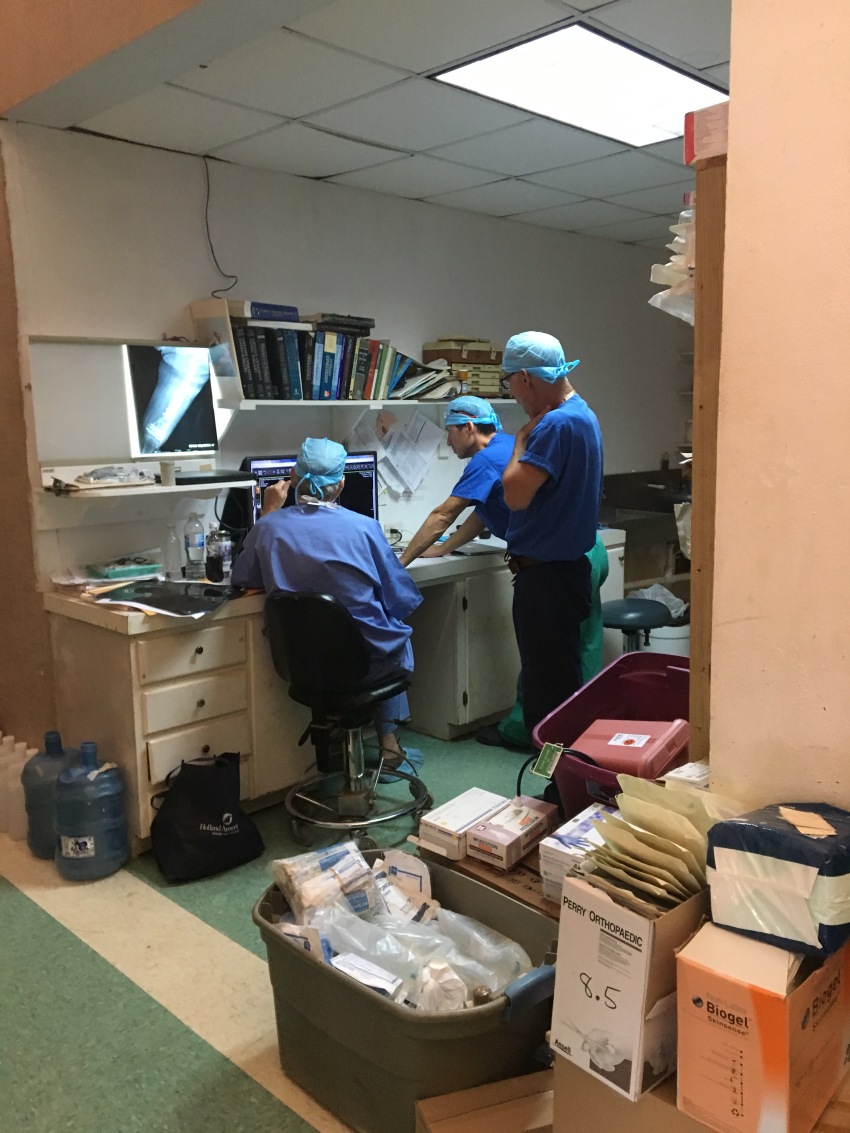 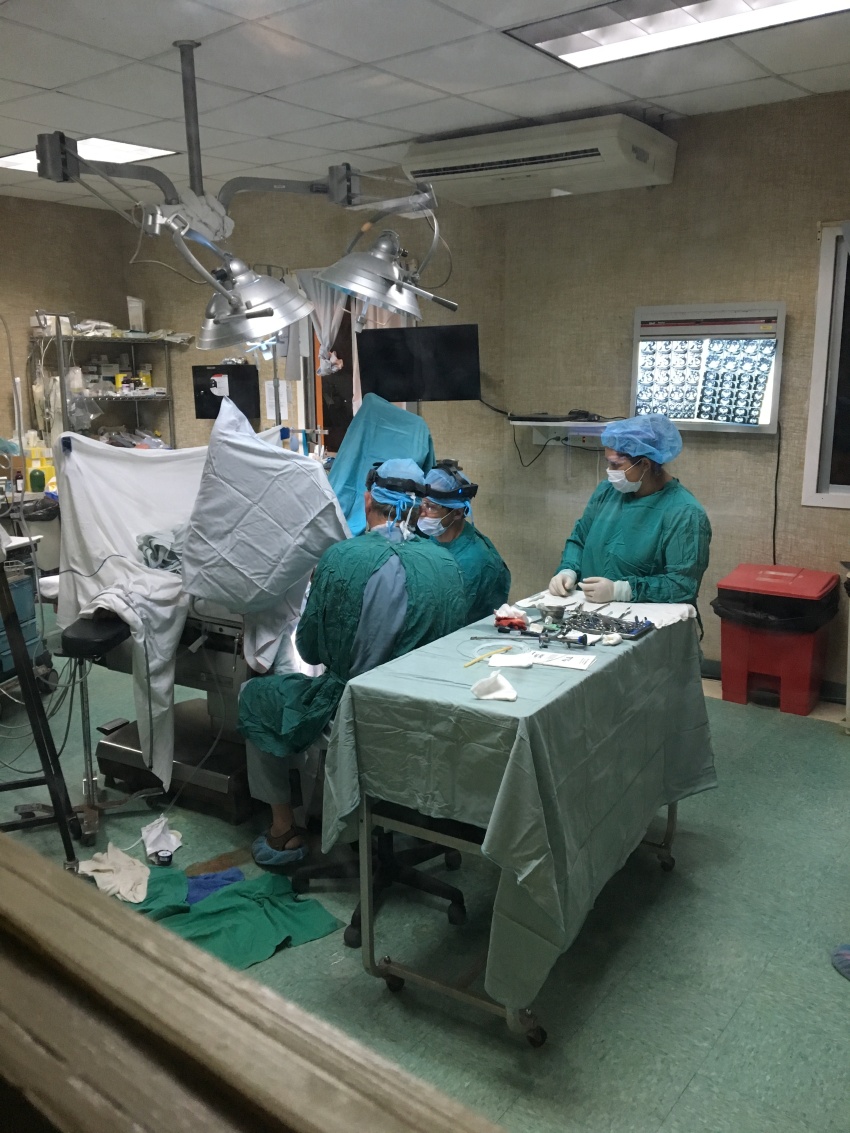 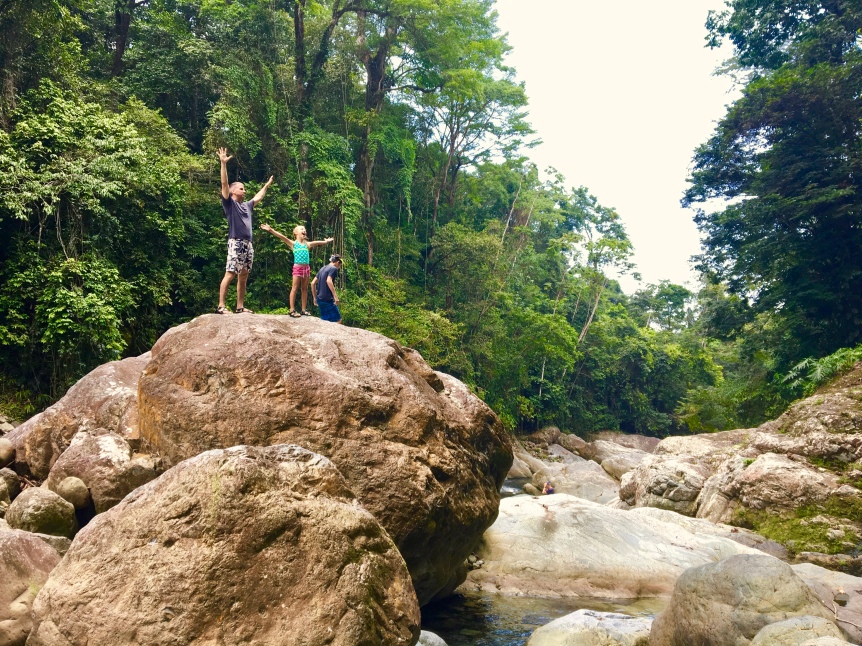 Dr. Dave and Juliet, king and queen of the hill

Liz, holding the baby I delivered.  Ok, I didn’t actually deliver her, but I was supposed to.  OK fine, Liz delivered the baby that I was supposed to deliver but didn’t, because I didn’t hear her calling me on the radio.  Natalia helped her.  Mom and baby are fine, no harm, no foul.  right? 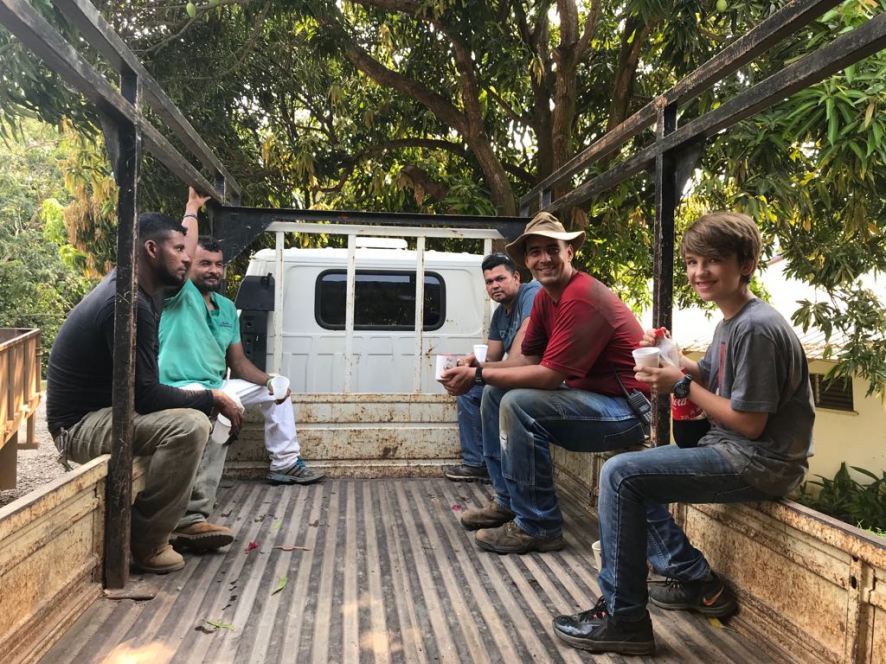 Will, working with Mr. Dave and the rest of the Maintenance crew

Not to be outdone by other Proud Facebook parents, here’s how we rock first day of online school (The Potter’s School)…  As you can see, our boys couldn’t be more excited about this auspicious day.  They’ve got their shiny new Fall clothes on (is that a booger on your right shirt sleeve, Owen?  Maybe just Jungle sweat…) 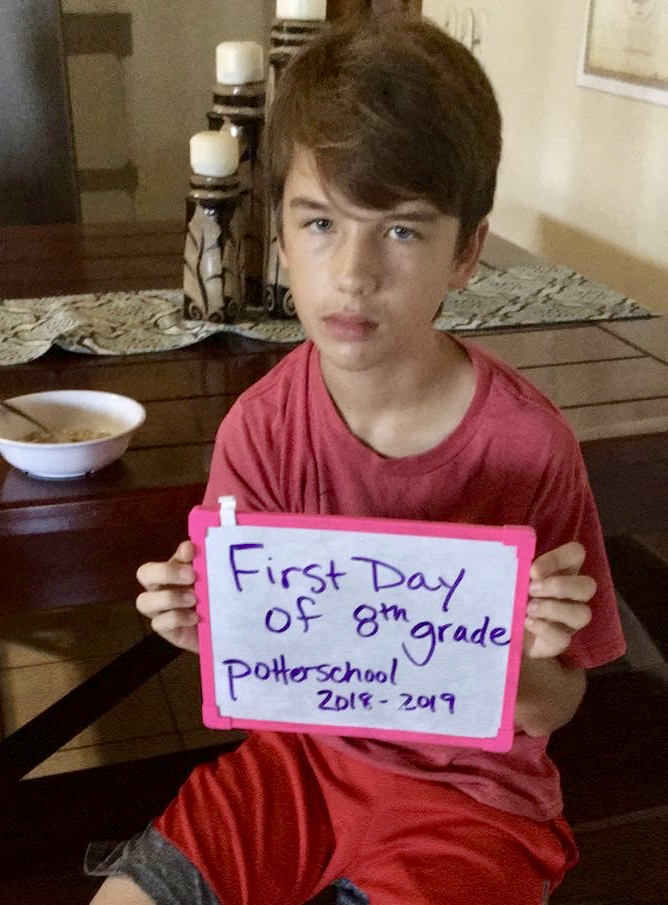