The first time I met Heydi I advised her that if she ever got pregnant again, she would probably die.  I even offered to set her up for tubal ligation, an operation to prevent any further pregnancy.

She came to me for treatment of her heart arrhythmia and heart failure.  She reported that she had nearly died in her first pregnancy 6 years previous.   She has what is known as atrial fibrillation.  Its a common heart problem for many people, but extremely rare at her age of 21.

The cardiologist felt that the mitral valve did not appear normal, very suspicious for mitral stenosis secondary to rheumatic heart disease (obviously this was not a formal means of echocardiogram).  So not only was the rhythm of her heart abnormal, but it was also structurally abnormal at one of the valves.  Rheumatic heart disease remains a top cause of heart failure world wide.  It is caused by a streptococcus infections (ie strep throat).  The body reacts to the strep infection and forms antibodies which attack the bacteria.  In rheumatic heart disease, the antibodies “accidentally” attack a portion of the heart valves which can have a similar appearance or structure to the bacteria.  This is why we treat strep throat, not really to make your throat better (which it actually doesnt help that much), but to prevent rheumatic heart disease.
The next time I saw Heydi in the clinic, she was pregnant.  My heart sank with the news, and yet there was a part of me that was relieved that she at least came back to our hospital even after I had given her such strict warnings about not getting pregnant.  If she was going to survive, she would need close followup care, and I felt like her chances were much better at our hospital.  I wanted to take care of her.
That being said, there was a part of me that hoped by some miracle that there would be a visiting obstetrician, maternal-fetal medicine expert, cardiologist, and critical care anesthesiologist whenever the time to deliver came.  That or a transport helicopter.
For those unfamiliar to the practice of obstetrics, Heydi probably would be transferred to a major university medical center if she were in the US.  The kind of medical center with multiple sub-specialists, and multiple helicopter landing pads on the roof, not just one or two.  The kind with multiple types of ICU’s, not just one or two types (with many ICU rooms per type).  The kind of center with specialized monitors, central lines, arterial lines, Schwan-Ganz catheters, advanced critical care teams.  Usually there are only a couple of medical centers of this quality in an entire state in the US.
Instead,  Heydi would come down a long dirt road, filled with pot holes, to a rural mission hospital in Honduras.  To give you an idea of what it is like, most of the time when traveling down our road, the vehicles must stop in order to pass through herds of cattle blocking the road.  It is some what of an art to get a vehicle through the middle of a herd without damaging it.  Not to mention the art it takes to weave through the maze of pot holes.  There is actually a large following of beggars who stand in the road with shovels every day, asking for tips as they fill up the never-ending number of potholes.
Not only are we rural, but its not easy to get there for many Hondurans.  The last bus that passes our hospital comes by at 3pm (public transport which is the only means for most people).  Occasionally, if you are traveling locally, you can find a three-wheeled motorcycle taxi.  Less than 3 miles to the east of the hospital, there are rivers that flood to impassable levels when it rains too much.  Just getting to the hospital can and is a challenge for most.  This is the “medical center” the Heydi would come to the night she went into labor: where a family practice doctor and a visiting CRNA (nurse anesthetist) would try to figure out how to keep her and her baby alive.
As if the challenges of having a pregnant patient with heart failure and atrial fibrillation were not enough in themselves, there would be more to overcome for Heydi. 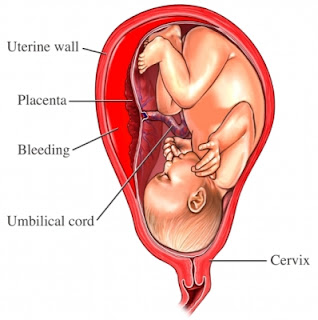 Heydi came in to the hospital about a month premature and with a placental abruption and rupture of membranes (her water broke).  A placental abruption (shown above) is when the placenta separates from the uterine wall prematurely causing both bleeding and also compromised oxygen delivery to the infant.  If it separates completely while the infant is still inside the mother, then the baby will die from lack of circulation and oxygen.  Heydi was bleeding at an abnormal rate on arrival, but her baby’s heart beat still was normal.
Quick yet complicated decisions had to be made.  If a mother is rapidly progressing in labor, it is possible to deliver normally through the birth canal despite having a placental abruption.  The question is whether the infant will deliver fast enough to avoid being affected by the steadily worsening placental separation?  In Heydi’s case there were also other considerations.  Typically, it is recommended that a mother with heart failure not push her baby out, for fear of worsening her already stressed heart.  We know from previous experience that telling a mother without an epidural not to push her baby out is nearly impossible.
The alternative is to do a c section.   It may seem like that would be the easy solution, but not necessarily.  Heydi’s heart was not only very irregular, it was going at an extremely rapid rate of 150 beats per minute.  That makes for an ineffective heart, not even mentioning the valvular disease (mitral stenosis).  You could literally see her heart pounding from across the room right through her hospital gown.  Not exactly the ideal operative candidate.  Furthermore, she was already bleeding and it was difficult to accurately assess how much blood she had already lost.  Did we want to do a surgery with a higher blood loss and potentiate her need for transfusions?  Transfusing someone in heart failure, atrial fibrillation, post operatively, and post partum (with multiple physiological shifts going on) did not seem like a safe scenario either.  Also not to mention, we have a hard time finding blood donors in the middle of the night.  In a rural hospital.  With no ICU.  With no intensive monitoring.  With cows walking down the road in front of the hospital. 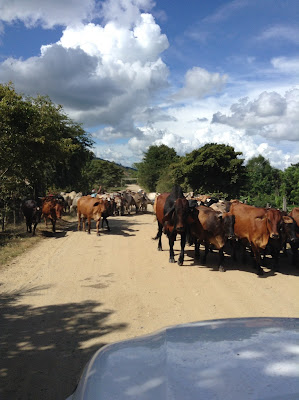 When the Lord decides to make His own name known to a people by His own handiwork, He sure knows how to do it.  Sometimes He even speaks through a donkey (Numbers 22:28).  At times I feel a bit like what the apostles describe in Acts 5:41,

41 So they departed from the presence of the council, rejoicing that they were counted worthy to suffer shame for His[a] name.

Obviously, we didn’t suffer, but it was all the same a joy to be a witness to His work.  Like a donkey that rejoices that his mouth was used to speak in a way that would never have been possible on his own.

Heydi and her child survived.  We chose to do a c section, and fortunately she did very well with the operation, with no complications and minimal blood loss.
….to the Praise of His glorious name….