“Take a flight to Abidjan, find Verlin, and talk about CHE (Community Health Evangelism).” Something like that was the directive given to an Nigerian believer by a mission leader who had met Verlin during an International Wholistic Missions Conference (IWMC Tracks – Promo video). (FYI, the 2019 IWMC meets near Kansas City, May 1-3). Never mind that she did not have information to connect with us, nor that we live 7 hours from Abidjan! Nevertheless, our Lord arranged the paths of His servants to intersect. Asalina’s heart and mouth filled with praise when she unexpectedly met Verlin at the West African CHE Internship in Ghana. She had no idea that he was to share there, and everyone rejoiced that the Lord brought Verlin to her doorstep, so to speak. He had even arranged our separate timetables to allow for meetings in Abidjan without her having to search for him. Asalina and Verlin spent hours of discussion about CHE and met with others who have efforts in progress after Debbie left for the U.S. and as Verlin prepped for trainings and interviews. 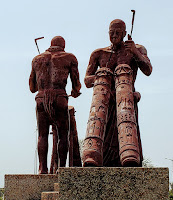 Her mission, World Challenge, is committed to integrating CHE in their endeavors around the world. They consider where, and how, to reinvest themselves initially in West Africa. We trust it will prove to have been a divinely called meeting, not one drummed up of human initiative, that shows results beyond those for which we now ask or imagine.

Debbie had a good meeting with her surgeon in Tennessee on Wednesday. A scope of her right knee is scheduled for Monday, April 15, with three weeks of physical therapy to follow. The operating premise is that scar tissue is creating her pain as the patella bumps over it. The implant does not appear to be damaged, according to an x-ray taken.

Your partners in the Gospel,
Verlin and Debbie