Carrie with a happy camper!

Our camp for adults with disabilities was held July13-20 and had the theme of “Shalom.” We spent the week with old friends and new acquaintances. Although the week was not without some difficulties, we are very thankful for God’s blessings and answers to prayers! 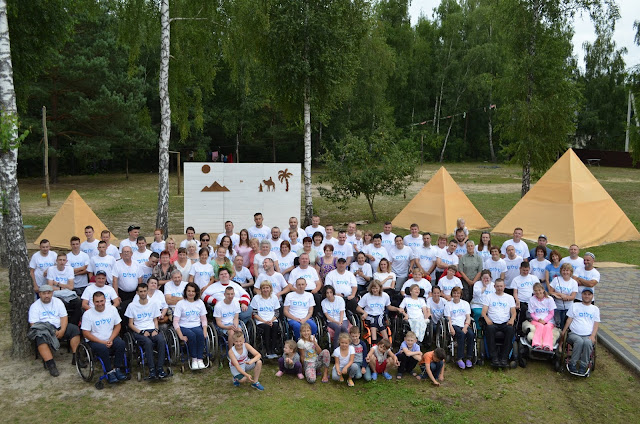 The forecast for the week of camp called for rain every day…a forecast that basically became a reality. We prayed for clearer weather so our friends with disabilities could spend more time outside. And we saw God answer that prayer in various ways. Sometimes it rained just as we were planning to go to the lake to swim, so our plans had to be altered. But other days it rained only while we were inside for meals or only during the night, so our plans were generally not affected. One blessing that the rain brought was that really warm temperatures – which many people with disabilities have difficulty tolerating – came only on the last day.

Another challenge we encountered was that the elevator in the facility was not working when we arrived and remained inoperable until the third day of camp. This presented a great challenge due to the large number of wheelchair users at camp, some of whom resided on the second floor. Additionally, there is no space on the first floor large enough to hold all of the participants of our camp at the same time. So it was a tremendous blessing that the first few evenings were rain-free and we were able to have our evening program outside! And what a big answer to prayer it was when the elevator was repaired and remained operational for the remainder of the week! 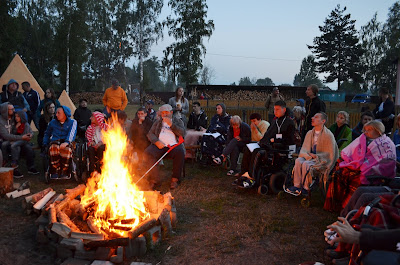 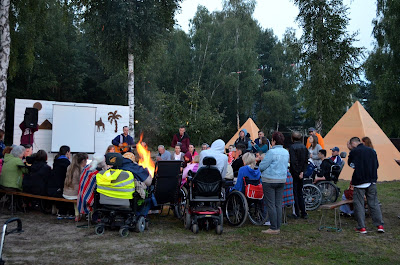 We welcomed our guests to camp on the first day in festive attire and with music and smiles. We all enjoy this time of when our friends with disabilities and their family members arrive at camp. The joy is almost palpable, embraces abound, and excitement fills the air! Somehow, I managed to find myself volunteered for the “dress-up group” again this year: 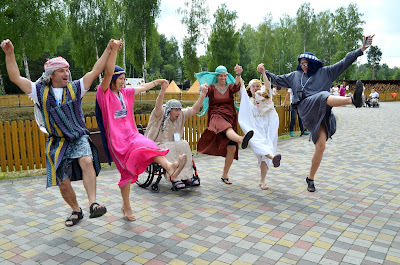 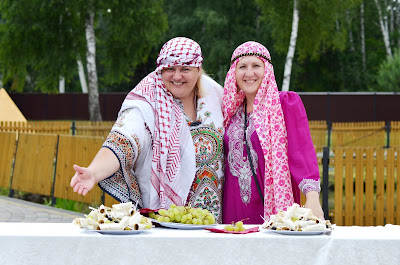 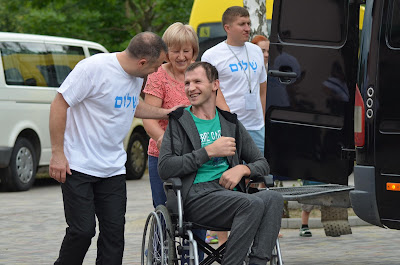 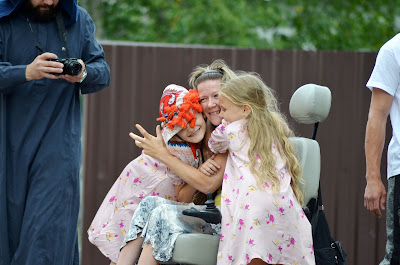 These two young girls above are growing up around people with disabilities because their parents work at Agape and/or serve in our ministry. They have a comfort level around people with disabilities that other children their age often do not. Mariika has cerebral palsy and because her speech is greatly affected, it is very difficult for many (myself included) to understand her. Not everyone attempts to converse with her. But these girls know Mariika. They not only know her, but they love her and consider her to be their friend. I just happened to be looking in the right direction when Mariika arrived at camp and these two girls ran to greet her with this enthusiastic embrace! This just may be my favorite picture from this camp.
Our Bible lessons for the week focused on the life of Joseph. Each day we met in small groups to discuss various lessons we could learn from his life. Then during the evening program, one team had the task of depicting that day’s story for the entire camp. Actors and actresses were born and everyone had a good grasp of lessons to be learned from the life of Joseph by the week’s end! 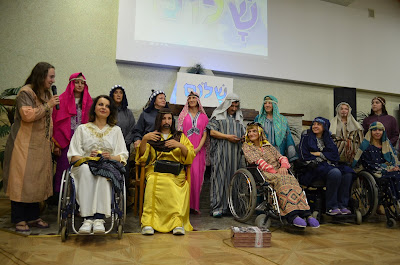 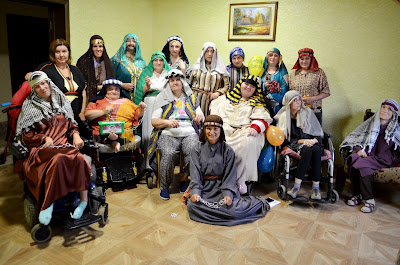 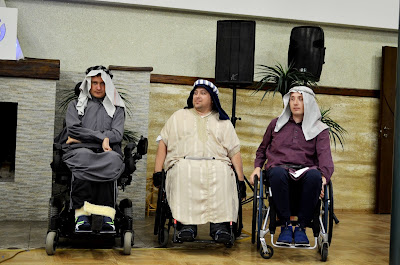 This year marked the first time in our camp that an individual with a disability was a group leader. Kolya has been a believer for 10 years now. He has discipled new Christians and served in the ministry in various ways for many years. But this year, he agreed to be a small group leader. When I asked him about it during the camp, he said it was exhausting for him to prepare and to teach, but that he also enjoyed it very much. Praise God for how He grows and uses His children! 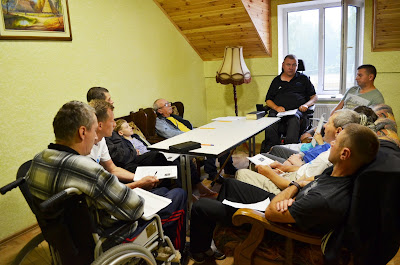 I was paired with Ira and her mother again this year. Ira is 33 years old and has cerebral palsy. She is unable to speak any words, but she comprehends much and she has ways of expressing herself. We can all accurately assess when she is happy, but other emotions, needs, and desires typically require her mother’s interpretation. Ira is all about participating in anything and everything! She’s ready to get out of bed first thing in the morning and wants to stay by the bonfire late at night until it burns out. She’s not interested in an afternoon nap on a rainy day – something her mother and I would have welcomed a time or two! She was highly disappointed when the rain affected our activities, but she was also ready to engage in the alternative activities presented. When Ira gets excited and smiles or laughs, her happiness is contagious! It was a joy to serve this family for a week! 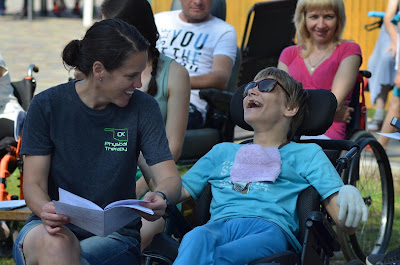 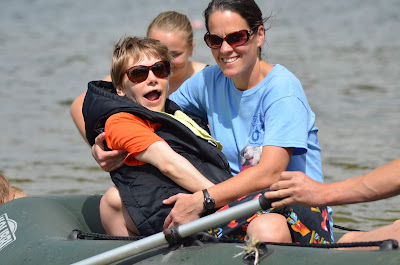 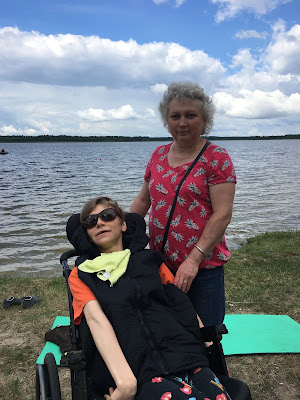 Some of our fun at camp included a few hours at the lake one afternoon. The water was cool from all the rain so only a few people swam, but plenty of people went for rides on the two large rafts. And everyone enjoyed soaking up the sun while it was out!

On another afternoon, we had a photo scavenger hunt game where we had to recreate scenes from Joseph’s life:

We also had plenty of free time to simply fellowship and play games together: 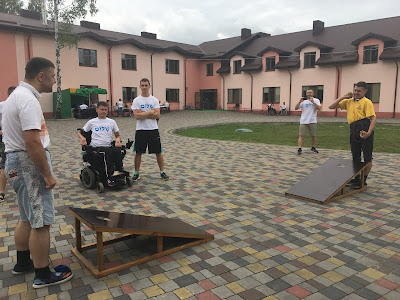 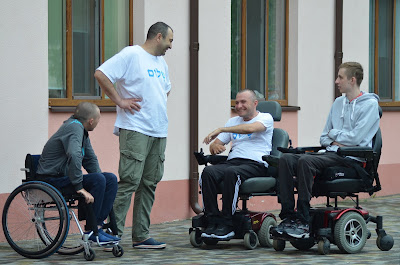 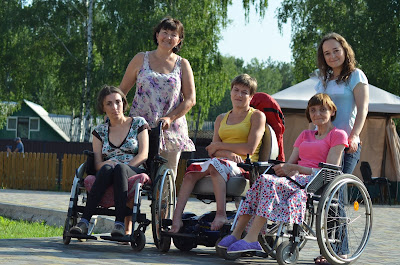 We enjoyed wonderful music throughout the week! One of our guests actually plays the violin professionally and she played several pieces for us one evening. We also invited two musical groups whose leaders have disabilities. In addition to playing their songs, they were able to encourage everyone through their testimonies. 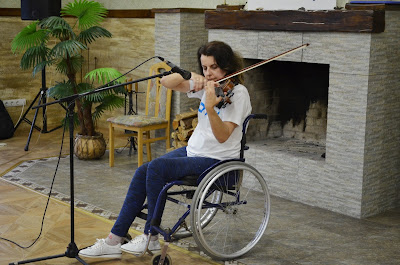 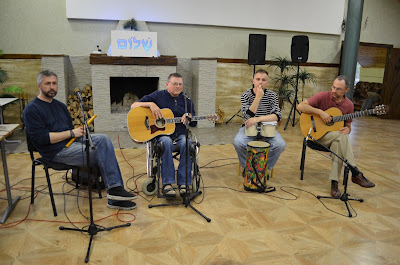 As you can see, it was a great week and we thank God for His mercies and blessings! Many seeds of truth were planted this week, both in the small and large group times as well as during individual conversations. Please join us in praying for the repentance of many people who participated in this camp. Shalom!